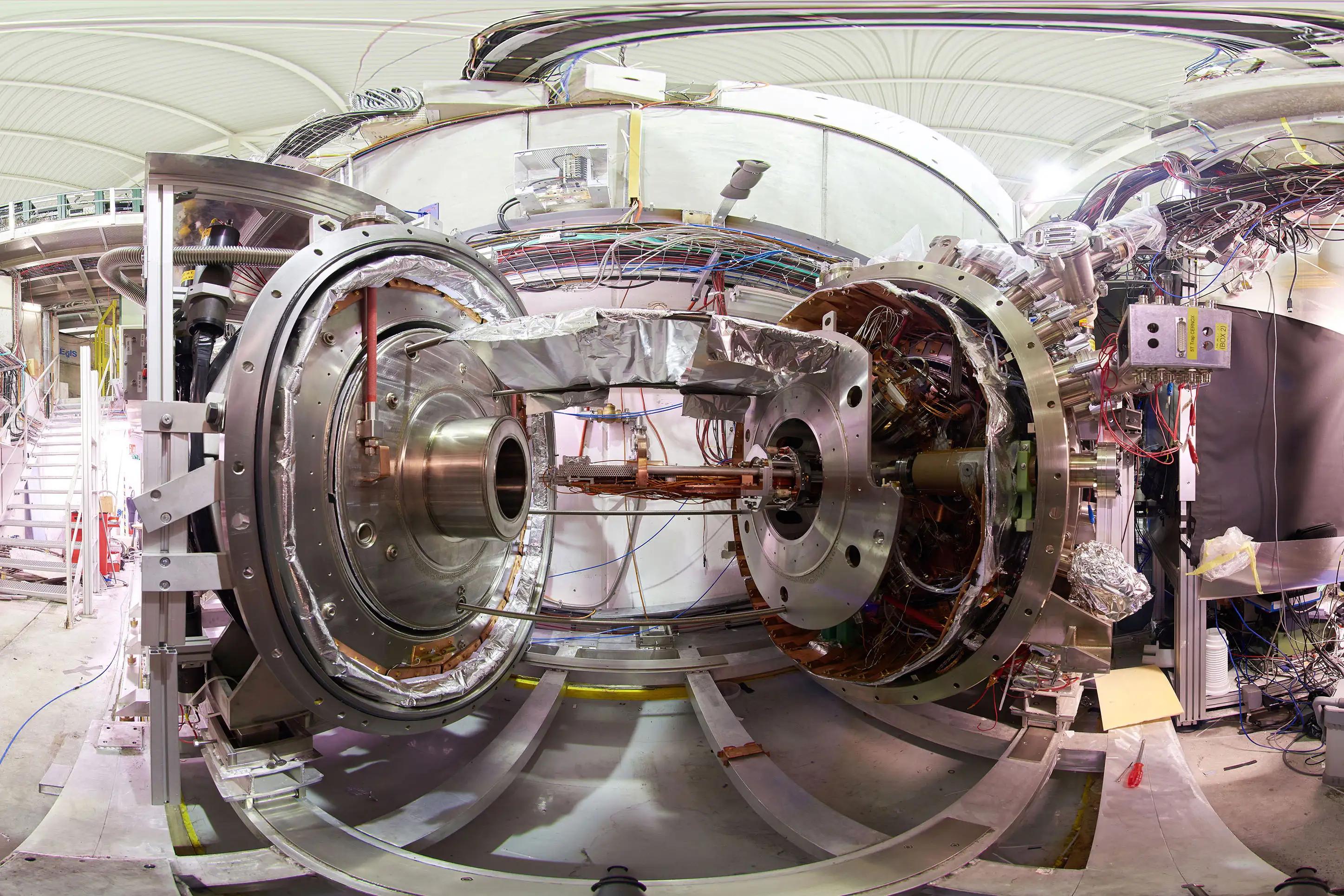 Antimatter.
What’s the first thing that comes to mind when we hear this term? A deadly bomb from Dan Brown’s “Angels and Demons”? Or some fictional term?

Everyone knows antimatter is the opposite of matter, but how many understand the meaning of this?

According to the Big Bang Theory, in the early universe, antimatter was created along with matter equally, but in our world, we don’t see antimatter at all, except when they are artificially created in our particle accelerators after much effort.

Let’s start from the very beginning:

Firstly, after Einstein published his Special Theory of Relativity, Victor Hess discovered cosmic rays (light belonging to celestial objects further away from us). Then the Quantum Theory was devised by Erwin Schrodinger and Werner Heinsberg.

Later on, Paul Dirac wrote down an equation combining both Special Relativity and Quantum Theory, and just as \(x^2 = 4\) had two solutions, namely \(+2, -2\) so did Dirac’s equation. This suggests that if particles exist, so do “antiparticles”. If an electron exists, so must an “antielectron”, with the same mass but an opposite charge. Similarly for a proton, a neutron, nucleus, atoms, molecules, compounds and who knows maybe a whole universe. But, this was just a theoretical thought.

Further, Cronin and Fitch studied K-mesons (they studied a special type that was regarded to contain half of matter and the other half as antimatter) and found that they had different lifetimes, thus, it was noted that the fundamental symmetry principle of physics was violated.

As stated above, scientists wanted to understand anti nuclei. Would it contain the symmetry similar to a nucleus (a neutron + a proton) as Dirac had predicted? The answer was found when the antideuteron was discovered at CERN. The nucleus of antideuteron found contained an antiproton and an antineutron (A deuteron nucleus consists of a proton and a neutron).

With the help of Internal Storage Rings, the first proton-antiproton collision occurred and new discoveries, such as quarks and gluons (smaller parts of a proton) were identified.

And, finally, in 1995, the first antiatom- antihydrogen was produced. 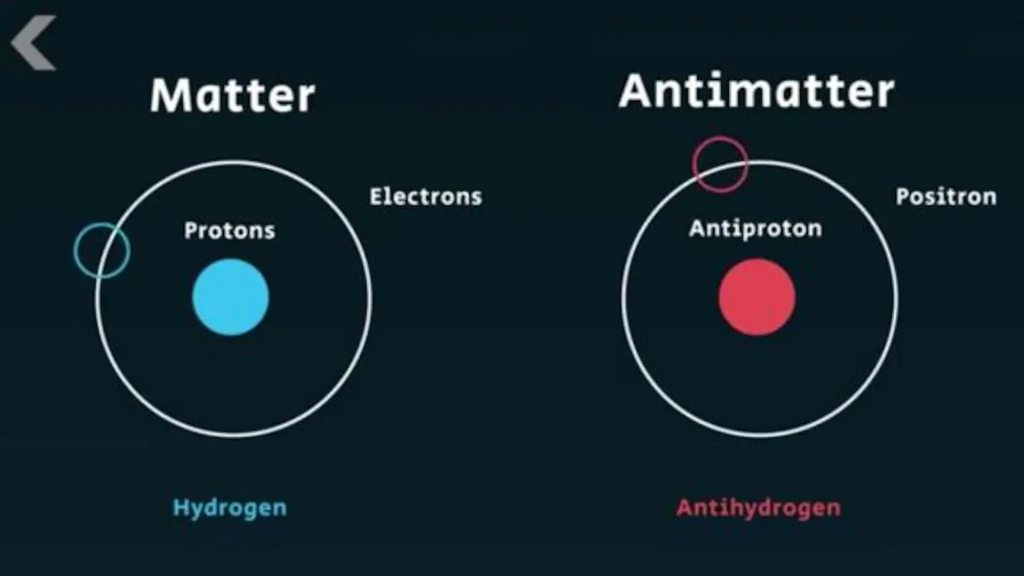 The Atom and The Antiatom
Credits: IndiaToday

To test them further, scientists at CERN made antimatter ‘cold’ so they could study them before they could collide with matter. The mechanism of the same is shown below. They increased this time before it could collide to 16 minutes in 2011. In this time, antimatter was tested carefully with spectroscopy. 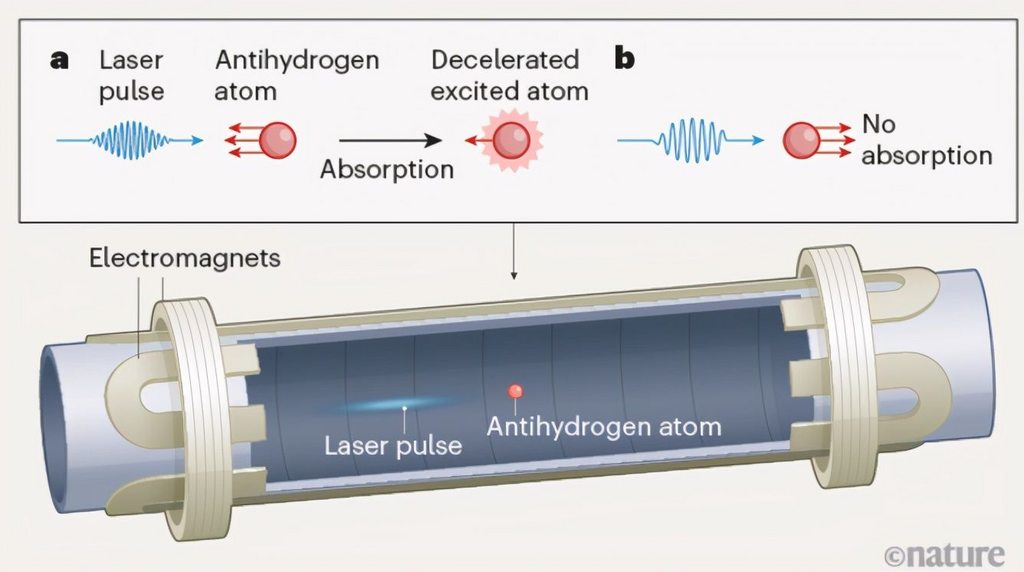 The Cooling of Antihydrogen through Lasers
Credits: Nature

Since, we know that matter and antimatter are not the exact opposites of each other; nature prefers matter over antimatter by 1 part in 10 billion, thus, scientists were curious to find the exact charge of antihydrogen. The result, based on 386 recorded events, gives a value of the antihydrogen electric charge as \((-1.3±1.1±0.4) × 10-8\), the plus or minus numbers representing statistical and systematic uncertainties on the measurement. This was found by studying the deflection of antihydrogen within an electric field. If it would deflect, then it wouldn’t be electrically neutral. And by how much it would deflect we could find out its value.

With the help of the BASE (Baryon Antibaryonic Symmetry Experiment) , the magnetic moment of the antiproton was found to be \(2.7928473441(42)\). In the BASE, the team sets up two Penning traps – devices that hold particles in place with electromagnetic fields – the team aims to measure the antiproton magnetic moment to a hitherto unreachable part-per-billion precision.

A direct measurement of the magnetic moment requires the measurements of two frequencies: the Larmor frequency, which characterizes the precession of the spin of a particle, and the cyclotron frequency, which describes a charged particle’s oscillation in a magnetic field.

BASE’s double Penning trap separates the measurements of the Larmor as well as the cyclotron frequency from the spin-state analysis. Two traps are used for the measurements: the analysis trap, which will identify the spin state of the particle, and the precision trap, which will flip the spin of the particle while measuring the cyclotron frequency.

Two further traps are used. The monitor trap will check for any variance in the magnetic field caused by external sources, allowing the BASE team to make instant adjustments to the core traps while measurements are underway. The reservoir trap will store antiprotons for months on end, allowing the BASE collaboration to continue operating even without a beam. 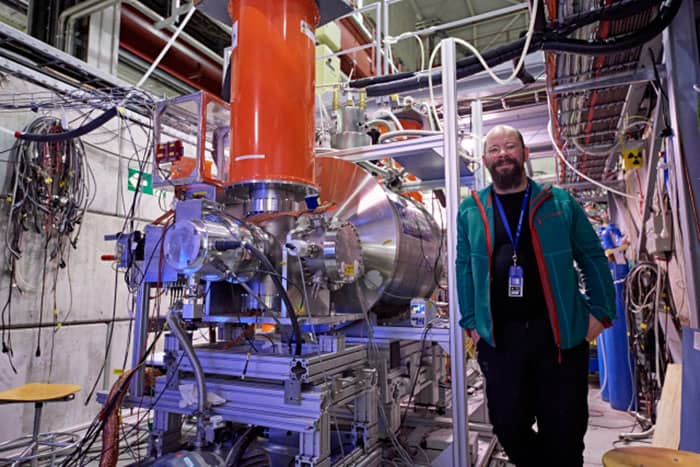 The BASE
Credits: CERN

This ends the history for now, more research is ongoing on the same.

When matter and antimatter collide, the only thing that remains is pure energy. The antimatter bomb as expressed in Angels and Demons is based on this. 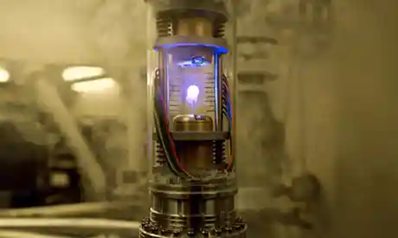 The Antimatter Bomb from Angels and Demons
Credits: The Guardian

During the first fractions of a second of the Big Bang, the hot and dense universe was buzzing with particle-antiparticle pairs popping in and out of existence. If matter and antimatter are created and destroyed together, it seems the universe should contain nothing but leftover energy. But as mentioned above, nature favors matter over antimatter by 1 part per 10 billion, thus the whole universe is that tiny part that survived.

To find this out read the Part-2 of the Antimatter Series.

Antimatter: once considered fictional, is now the rarest and the most dangerous and expensive “stuff” that can be produced. The cost of antimatter is about $62.5 trillion per gram.

I hope you enjoyed part 1 of the antimatter series.

In part two I will be including some of the theories suggested as to why there is a matter- antimatter asymmetry and the quantum entanglement of antimatter and matter.