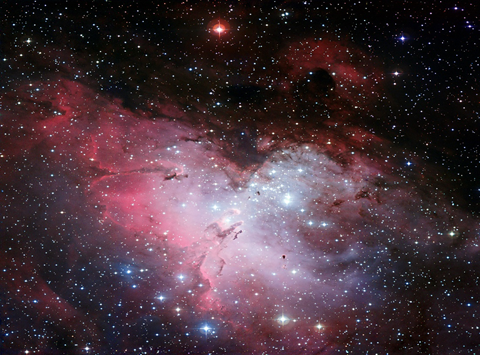 SEDS Celestia presents to you this amazing article about one of the most beautiful nebula present in this universe, Eagle Nebula. This articles talks in depth about interesting facts, science and history of this nebula including “The Pillars of Creation”. Dive right in to learn all about it .

Nebulas are one of the most fascinating astronomical objects and have been a keen interest of astronomers for centuries. One of the most popular among them is Eagle Nebula. Eagle Nebula, also known as the Star Queen nebula is located in Serpens constellation at Serpens Cauda (the tail of the constellation). This nebula has been given sixteenth place in the Messier catalogue and has been blowing astronomers’ mind with its stellar beauty.

Eagle Nebula or M16 was discovered by Jean-Philippe de Cheseaux in 1745-46. It is a part of IC 4703, the H II region, a type of emission nebula located in the Sagittarius arm of the Milky Way Galaxy. In late 18th century, when this object began to be catalogued by astronomers, only the star cluster was visible and it was assigned as M16, which later came to be known as Snow Queen cluster.

Later, further studies revealed that there is a large area of glowing hydrogen which covers the star cluster and is invisible to the naked eye. It somewhat resembled as an eagle stretching its wings, which gave rise to its common name. As there was more advancement in astrophotography, we began to explore various features of the nebula especially dark nebula (dark patches in the above image) and many features were also given special name which we would be discussing in the next section!! 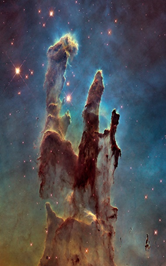 “The Pillars of Creation” – NASA, ESA and The Hubble Heritage Team

In 1995, Eagle Nebula grabbed the world’s attention when two astronomers, Jeff Hester and Paul Scowen used Hubble Telescope for capturing a large region of stellar formation inside the nebula which later became popular as the “Pillars of Creation”. The dark patches in the picture were believed to be protostars. These columns are composed of materials which are essential for the formation of stars like interstellar hydrogen and dust, and stretch to about 4 light years in space. Astronomers have also discovered dense pockets of Evaporating Gaseous Globules (EGGs) on the surface as well as inside these columns. Most of the EGGs lack enough gases needed for star formation but some of these will eventually lead to the formation of new stars. The name “Star Queen Nebula” was introduced by American astronomer Robert Burnham Jr. as its central pillar resembled to the Star Queen shown in silhouette.

In recent years, few observations have made astronomers question the existence of the Pillars of Creation. In 2007, an evidence from Spitzer Telescope suggested that the Pillars of Creation may have been destroyed due to shock waves generated by a supernova explosion which had occurred some 8000-9000 years ago and the light has already gone past us but due to the slow-moving shock waves it will take more thousand years to observe the destruction of the Pillars. Similarly, in 2010 NASA’s Chandra Observatory’s images showed that there were only a handful of X-Ray sources (randomly generated dots) and they do not coincide with the pillars, since new stars are considered to be a hotbed of X-ray sources, this led scientists conclude that the star formation days of Pillars of Creation are over and the Pillars have already been destroyed. But, in 2014, the pillars were imaged by Hubble telescope for the second time and this time giving more accurate information on the rate of evaporation occurring within the pillars. Scientist later discovered that no supernova explosion had occurred inside the pillars and the pillars are estimated to last at least for another 100,000 years. 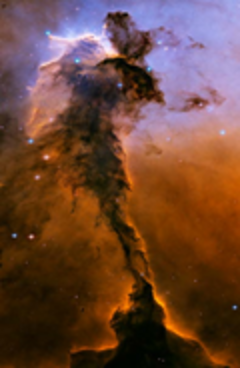 Stellar Spire is another active region of star formation located to the left of Pillars of Creation. It is a large tower of gas and is approximately 90 trillion kilometers in length. The ultraviolet light coming out of the young stars inside the spire have eroded it and is responsible for illuminating the rough surface of the spire.

The Eagle Nebula occupies an area of 70 by 55 light years in size (30 arc minutes) while its open star cluster has radius of about 15 light years (7 arc minutes in diameter). The brightest star in the Eagle Nebula is HD 168076. It is a binary star system which consist of O3.5V and O7.5V stars. This binary star system has an apparent magnitude of 8.24 and can be observed with good binoculars. This star has mass roughly 80 solar masses and luminosity of up to 1 million times of that of the Sun.

The young open star cluster associated with Eagle Nebula; NGC 6611 was formed 5.5 million years ago. It is a type-c cluster which means it is very loose and irregular. The ultraviolet glow of hot, blue stars of this cluster is mainly responsible for the brightness of Eagle Nebula. Scientists suspect that the nebula has various such type of star-forming clusters within it.

M16 is about 7000 light years away from earth and resides in Serpens constellation. Its co-ordinates in Equatorial Co-ordinate system is given by RA 18h 18m 48s Dec -13° 49’ 0’’. M16 has an apparent magnitude of 6. There are different stars and constellations near M16 which also helps in providing its relative position with respect to them.

For example, it is located 2.5 degrees in west of Gamma Scuti and a few degrees north of Omega Nebula. It can also be located using Teapot, a famous asterism located in Sagittarius constellation. First, find the brightest star in the Teapot (Kaus Australis) and then follow a line from Kaus Australis to just east of Kaus Media. During clear sky, finding the star cluster of M16 is very easy but for viewing its surrounding one must require a telescope with a large aperture.

Here comes the end of this article, I guess I have covered a lot of interesting facts about Eagle Nebula. So, let me summarize some of the facts: –

I hope this article would have given a brief insight about the Eagle Nebula. Well, Eagle Nebula is just one of the many fascinating messier objects and there’re lots of them to come in this messier series so do keep a track of them!!