For the First Time, Orbiting Supermassive Black Holes Have Been Observed

In a major discovery, astronomers have observed a pair of supermassive black holes orbiting each other, hundreds of millions of light years away.

The discovery is the result of more than two decades of work, and an incredible feat considering the precise measurements required. Understanding the nature of such interactions will give us a greater understanding of how galaxies, and the universe, have evolved.

“For a long time, we’ve been looking into space to try and find a pair of these supermassive black holes orbiting as a result of two galaxies merging,” says Greg Taylor,one of the researchers, from The University of New Mexico (UNM).

“Even though we’ve theorised that this should be happening, nobody had ever seen it until now.”

The team observed the pair of black holes in a galaxy, named 0402+379, roughly 750 million light years from Earth. 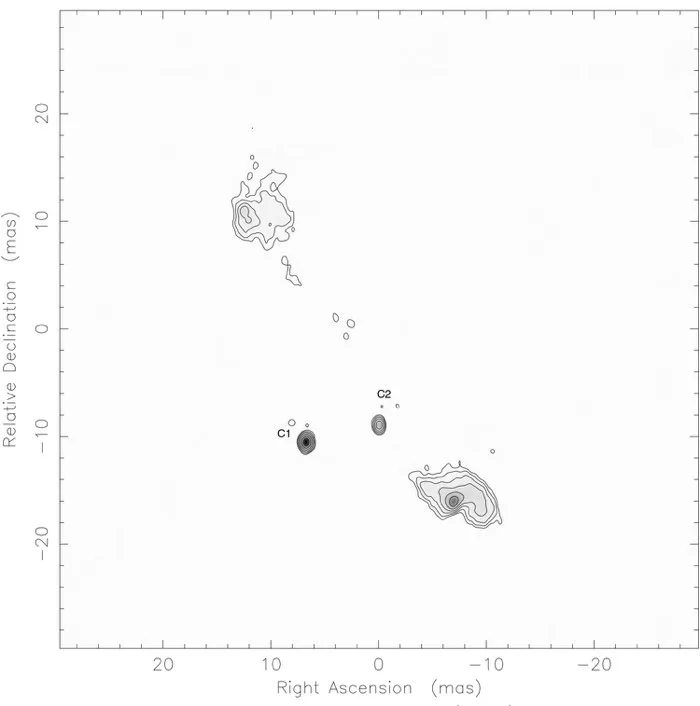 According to Karishma Bansal, the first author on the paper, also from UNM, the combined mass of these supermassive black holes is about 15 billion times that of our sun, and their orbital period is around 24,000 years.

This means that even though the team has been observing these black holes for over a decade, they haven’t been able to detect even the slightest curvature in their orbit.

“If you imagine a snail on the recently-discovered Earth-like planet orbiting Proxima Centauri – 4.243 light years away – moving at 1cm [0.4 inches] a second, that’s the angular motion we’re resolving here,” explains Roger W. Romani, one of the researchers from Stanford University.

Black holes are notoriously difficult to study because they cannot be directly observed, but can only be detected from their effect on nearby matter.

So, to find the orbit of these black holes, the UNM team used the Very Long Baseline Array (VLBA), which is composed of 10 radio telescopes. By measuring the various frequencies of radio signals emitted by the black holes, the team was then able to plot their trajectory.

“When Dr. Taylor gave me this data I was at the very beginning of learning how to image and understand it,” says Bansal.

“And, as I learned there was data going back to 2003, we plotted it and determined they are orbiting one another. It’s very exciting.” The technical achievement of this discovery is a triumph and will vastly improve our understanding of these enigmatic objects.

Ever since Einstein’s theory of general relativity, astronomers have been fascinated by supermassive black holes. Recently, there have been several new discoveries about black holes, but there’s still a lot about them that we don’t know.

Continuing to observe the orbit and interaction of these black holes will reveal a lot about where our galaxy came from, where it might be heading in the future and the role that black holes play in this process.

Currently, the Andromeda galaxy, which also contains a supermassive black hole, is projected to collide with our Milky Way – making the event that the UNM team is observing our galaxy’s potential future in a few billion years.

“Supermassive black holes have a lot of influence on the stars around them and the growth and evolution of the galaxy,” says Taylor.

“So, understanding more about them and what happens when they merge with one another could be important for our understanding for the universe.”

The UNM team will come back to these black holes in a few years time to confirm observations and improve their projections around orbits and trajectories.

For now, we can enjoy the fact they’ve finally delivered a direct observation for the first time and no doubt will inspire other work to push forward amongst the wider scientific world.

The paper was published in The Astrophysical Journal with a pre-print version available on arXiv.