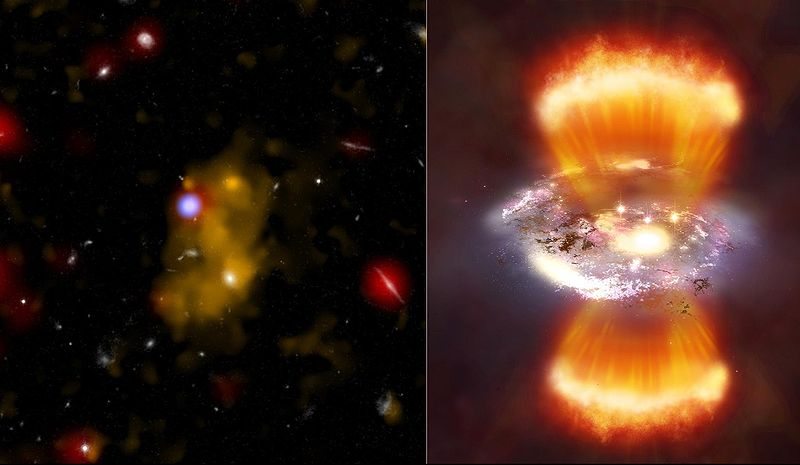 Have you ever looked up in the night sky and realized, there are so many celestial objects and phenomena we have discovered in the mere past four or five centuries? Well, the universe never ceases to baffle us, and it did so again in late 1990s, when some astronomers found ginormous gas clouds made almost entirely of hydrogen gas containing multiple galaxies. Yes, and by ginormous, I mean of sizes almost 4-5 times that of Milky Way! Even though being around 11.5 billion light years away, this “blob” in space glowed brightly, a phenomena that couldn’t be explained at that time. As they researched more, they found out that this particular specimen (named LAB-1, for obvious reasons) produced stars at the rate of almost 100 times than Milky Way! This is due to two very large galaxies residing at the center, being fueled with materials by smaller galaxies surrounding them. This mega-star production factory also emits light in the UV spectrum. Being so far away, the light gets red-shifted to the extent that it is seen as a Lyman Alpha line in the spectrum (hence the name). In the case of LAB1, the two central galaxies will eventually merge to form a massive elliptical galaxy.

The fact that the light that reaches us from these blobs is mostly polarized, removes the possibility of the light being produced by the hydrogen gas, rather it assures us that in most of the cases, it is indeed the light from the galaxies inside, as that light would be polarized by scattering. The supermassive black holes in the center of older galaxies emit jets of radiation, further heating up the blob.

The next question is, therefore, what is the nature of the environment around these central star-forming sources? I know, you’ll say, hydrogen gas. But that is the “observable” matter. What about dark matter? After intense measurements, it was found that the mass of the dark matter surrounding the LAB1 is of the order of 10 million trillion times the mass of sun! But, as of now, not much can be deduced from the data that we have, like how the gravitational field and other phenomena like radiation cooling in the blob affects the polarization of the emitted Lyman Alpha photons. What we do know is, that by understanding various phenomena related to them, we can have a better understanding of how primordial galaxies were formed. Being a relatively new observation, a lot is yet to be uncovered!