How many Paradoxes can you find?

Let’s break down the word paradox to find out what it means. “Para” comes from Latin meaning “distinct from” and “Dox” comes from Doxa meaning “our opinion”. So paradox literally translates to “distinct from our opinion”. But, that doesn’t help much, does it? People often think paradoxes as unsolvable brain teasers, but they’re so much more than that. So what exactly is a Paradox?

Paradoxes that reach self contradictory results by applying generally accepted ways of reasoning. For e.g. the famous Penrose Triangle is a visual antinomy. Some other visual antinomies are shown below. 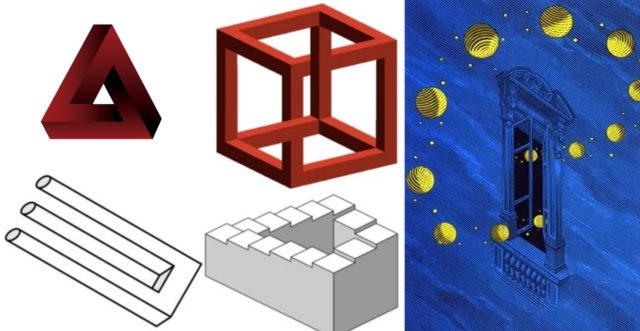 Is it possible to mathematically prove that 1=2? - Quora

A falsidical paradox establishes a result that not only appears false but actually is false, due to a fallacy in the demonstration. The various mathematical proofs (such as 1=2) are classic examples of this, often relying on a hidden division by zero. Most of Zeno’s Paradoxes are Falsidical in nature. It is described by Quine as one that “….packs a surprise, but is seen as a false alarm when we solve the underlying fallacy.”

A Veridical paradox often produces absurd and counter-intuitive results that are further proved to be true. The famous Monty Hall problem is an example of Veridical paradox (discussed further). As described by Quine, “…packs a surprise, but the surprise quickly dissipates itself as we ponder over the proof”.

That’s enough with the definitions. Let’s now go ahead and look at some perplexing paradoxes. (Disclaimer: this article doesn’t discuss Time Travel Paradoxes as they deserve an article of their own.)

The paradox arises in the absurdity of the statement that you know something (p) but do not believe in p. The first author to note this apparent absurdity was G. E. Moore. These ‘Moorean’ sentences, as they have become known, are paradoxical in that while they appear absurd, they nevertheless

One of the more interesting Moorean logics is that we as humans know that all humans have at least some amount of inconsistencies in their opinions and beliefs. This means we know there must be a few fallacies in the opinions we have. Yet we believe all our opinions to be true.

Moore’s paradox is an example of antinomy in logic.

Let’s say, there is a race between a Tortoise (T) and Achilles (A). T is given a headstart of some distance. Now the race begins, and A runs quickly towards T, but by the time A reaches the initial position of T, T itself has moved by some distance forward. Now A tries to catch up with T again, yet again by the time he reaches T’s position, T has moved some distance forward. Now the whole process works all over and over again infinitely and yet T is ahead of A. Inductively, we see that no matter how much A tries T will always be ahead of him and A can never overtake T. This completely absurd as even I can overtake a tortoise and I’m no Achilles! 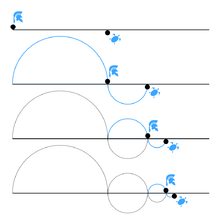 Resolution:Achilles paradox is one of Zeno’s paradoxes of motion in 5th Century BCE. The argument of Achilles never being able to overtake is not wrong but rather incomplete. Let’s see how we can prove the argument wrong. Let’s say Achilles’ speed is 1 unit/s and Tortoise’ speed is 0.5 unit/s and there is a distance of 1 unit in between them. By the First iteration A moves 1 unit (to initial position of T; meanwhile T has moved 0.5 units), by second iteration A moves 0.5 units (to the second position of T; meanwhile T has moved 0.25 units) and so on… 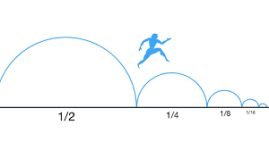 We all know that this summation converges to S = 2 units and since A’s speed is constant (1 unit/s), time taken by him to cover this distance = 2 seconds.

This is a very surprising result as calculating S from the above equation requires the use of modern mathematics. This means proving this paradox took about 2000 years! This paradox is an example of Falsidical Paradox since the reasoning does not take into consideration that infinite series may be convergent and give a finite value. For about 2000 years Achilles paradox was thought to be an Antinomy. This just goes to say that some paradoxes which we may think are antimonies may be proven to be Falsidical by using some even more advanced tools.

Now every time you overtake something while moving, remember there were infinitely many steps/ divisions between you and that object before you actually overtook it.🙂

Theseus was thinking one day when I replace one of the planks on my ship, it still remains my ship. Let me replace another plank, well it is still my ship. Now if I keep doing this and one by one all the original pieces are replaced by a new piece, is this still my ship? Furthermore if I use the old pieces and place them perfectly in the same position as they were originally, which one truly is my ship?

Resolution: There are many theories on the resolution of this Paradox, but the most compelling one is the “gradual loss of identity over time”. As the parts of the ship are replaced, the identity of the ship gradually changes. At any given instance, instead of saying that it is still the same ship, it would be more accurate to say it is a “replica” of the original ship. As the parts are replaced, the new boat becomes exactly that; a new boat. This theory suggests that the ship made from the original parts in the same position as before will be the original ship, as those parts are the actual pieces that participated in Theseus’ journeys.

A constantly changing identity begs the question of “Who am I”?

Amazing consequence of this resolution is that You are not the same You from 7 years ago. As all of the cells that make up your body get renewed completely in around 7 years. So the person you look at in your old photos is not You but a replica of You from 7 years ago.

Statement: At a club, there always exists a particular person such that if he is a drinker, then everyone else present at the club is a drinker.

Resolution: the apparently paradoxical nature of the statement comes from the way it is naturally stated. It seems counterintuitive that there could be a person who is causing others to drink. To prove this statement let me first explain what “vacuously true” statements are.

Vacuously true statements are statements which are true only because the antecedent cannot be satisfied.

For eg, “All bottles in this room are red”, will be true even if there are no bottles in that room because there is no antecedent of any bottle of any colour other than red present in that room.

So to explain our apparent paradox we split the statement into two conditions,

First, where everyone at the club is a drinker. Hence we may choose any person and this statement holds.

Second, where one or more than one at the club is not a drinker. If we choose one of the non-drinkers, then the first part of the statement is not satisfied (that if a particular person drinks…), hence the following part of the statement holds no truth value and hence is a true statement. We could have even said “if a non drinker drinks, then earth is flat”. This would still be logically true as the statement forms a vacuous truth.

This Paradox is a Veridical Paradox as it is simply a play with words and after a bit of explanation the truth emerges within the statement itself.

Amazing Consequence of this is every time you find yourself alone in the room; remember that you are the smartest, loveliest, best looking and healthiest person in that room.😉

Some Paradoxes to ponder upon

Statement: Does a barber who only shaves those who do not shave themselves, shave himself?

Statement: A teacher announces there will be a Surprise test in the next week’s weekdays. The students think that the test can simply not occur on Friday because if it did not happen by Thursday the students will know it will be on Friday and it wont be a surprise. Hence the test cannot happen on Friday. By similar argument the test cannot happen on Thursday, and inductively on none of the days of the upcoming week. The students relax thinking there will be no test but the teacher takes a test on Wednesday anyway, taking everyone by surprise! Where was the fallacy in the logic of the students?

A stair has height of 3 and width 4. So an ant crawling from the bottom to the top will have to cover a distance of 7. Now the stair is divided into two stairs of height 1.5 and width 2 each. Still the ant has to cover a distance of 7. Keep repeating the process of dividing the stairs into smaller and smaller stairs. Now suddenly we see something like a hypotenuse of a triangle. And by Pythagorus’ theorem we get that the length of that hypotenuse is 5. So herein lies the paradox, does the ant walk 5 units or 7 units? Or is 5=7?! Pythagorean “Paradox” (right-angled triangle). - Mathematics Stack … 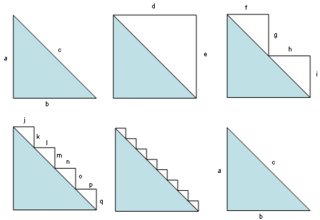 (Spoiler alert: while you are thinking about this, also think about fractals 😉)

Statement: Is an expired poison more poisonous or is it harmless?

Gabriel’s horn is a mathematical object with finite volume but infinite surface area. This in simple terms means that if we try to paint the inside of the horn, you will always run out of paint, but if we pour the paint into the horn, it will fill the horn using a finite volume of paint. vsauce theme plays in the background.

Statement: A donkey is kept exactly between two identical stacks of hay. The Hay are of identical size, shape and emit identical odour (basically the same in all aspects). How will the donkey ever choose which hay to go for first? Will it simply starve itself to death because there are two perfectly identical foods available for it and it cannot decide? 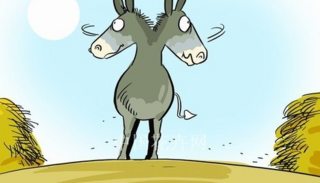 Can an Omnipotent (one who is capable of doing everything – an all powerful being) God create an object that it cannot lift?

Well if you have stuck around till the end, I heartily thank you for reading. ❤ Paradoxes provide an amazing and unique way of thinking. It is the passion of thought that drives us to think the unthinkable.

“This, then is the ultimate Paradox: To Discover something that thought itself cannot think.”