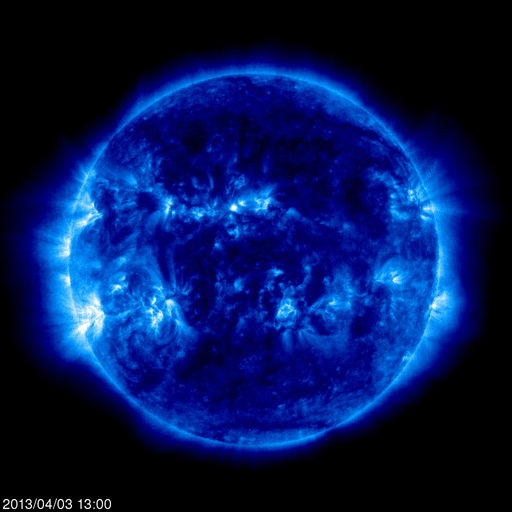 On 2nd December 1995, the European Space Agency (ESA) launched the Solar and Heliospheric Observatory(SOHO) as a joint operation with the National Aeronautics and Space Administration(NASA) to study the sun. It was launched on the Lockheed Martin Atlas IIAS launch vehicle and was designed to study the sun inside-out. It was meant to operate till 1998, but its success encouraged NASA and ESA to support many mission extensions, allowing it to cover 11 periods of solar activity. SOHO was a part of the International Solar-Terrestrial Physics Program and continues to operate after over 25 years in space and has been extended until the end of 2025. 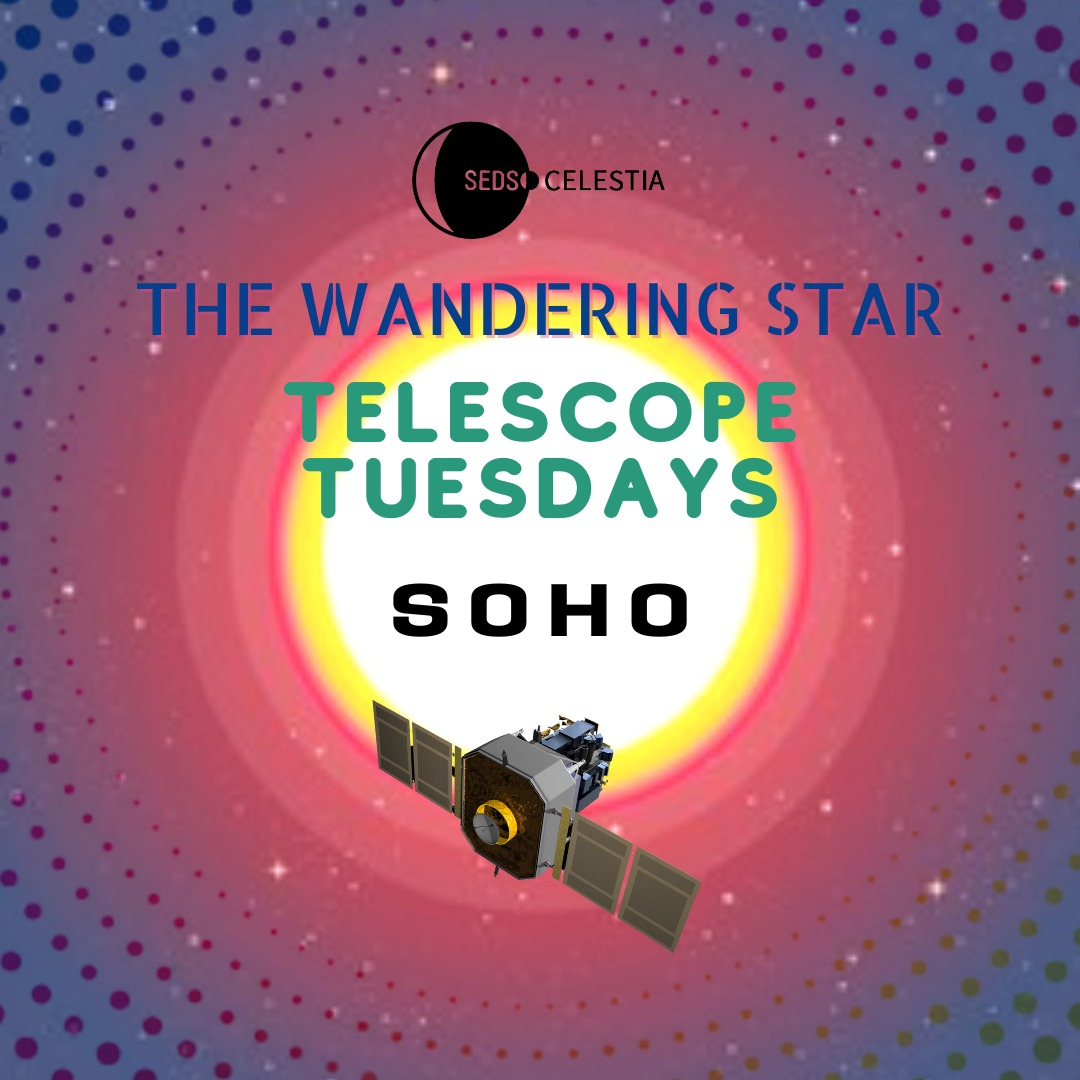 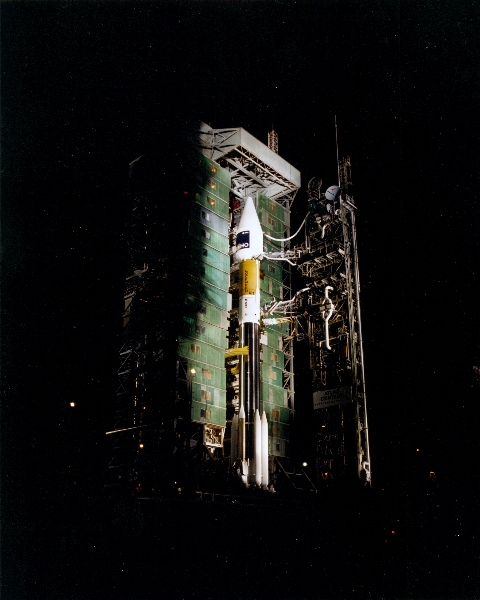 SOHO is also the primary source of near-real-time solar data for space weather predictions. It is near the Earth-Sun L1 point (0.99 astronomical units(AU) from the sun; 0.01 AU from the earth). It is also the first three-axis-stabilised spacecraft to use its reaction wheels as a virtual gyroscope which was adopted in 1998 after an accident which nearly resulted in the loss of the spacecraft. 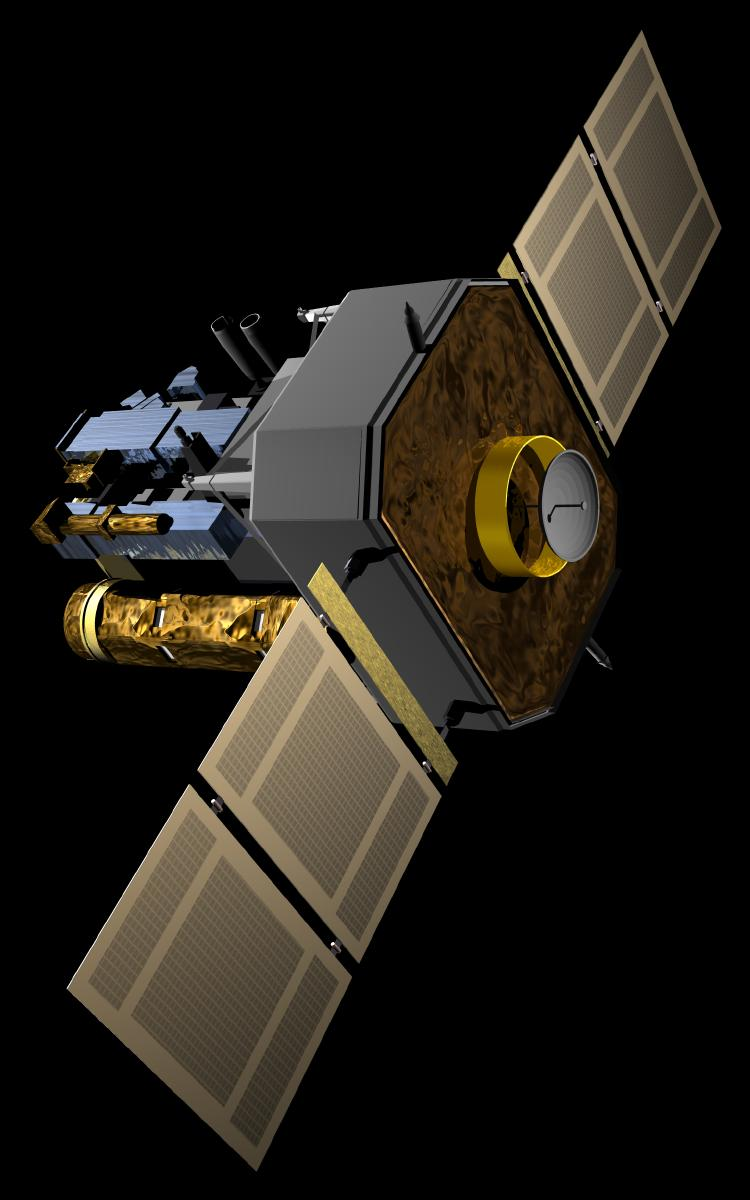 To achieve its goals, SOHO carries a payload of 12 complementary instruments. It is an 1850 kg spacecraft powered by solar panels delivering \(1150 W\). The payload weighs \(650 kg\) and has a \(500 W\) power consumption. Each instrument is capable of independent or coordinated observation of the sun and spacecraft components. The instruments are:

CDS, EIT, LASCO, SUMER, SWAN, and UVCS, are used for this solar atmosphere remote sensing. CELIAS and COSTEP are used for “in situ” solar wind observations. GOLF, MDI, and VIRGO are used for helioseismology.

SOHO provided the first images of the sun’s convection zone and of sunspots below the surface. It has provided detailed measurements of solar winds, event identifying source regions and acceleration mechanisms. It has also helped in monitoring eruptions from the sun that cause effects on the earth. It has improved the accuracy in forecasting geomagnetic disturbances and has shown early-warning capabilities for space weather. The mission has also discovered 4000 new comets and new solar phenomena like coronal waves and solar tornadoes.

EIT full sun images in Fe XII 195 A (left), Fe IX/X 171 A (middle), and the ratio of these two images (right). The latter one gives an indication of the temperature distribution in the Sun’s corona with dark areas being cooler regions and bright areas being hotter.
Credits: NASA

SOHO orbits at the first Lagrangian point L1 on the Earth-Sun line. At this point, the balance of the Earth’s gravity and the Sun’s gravity equals the centripetal force needed for an object to have the same orbital period around the sun and earth.
But the SOHO spacecraft is not exactly at L1 as this causes communication issues due to radio interference generated by the sun and lack of stable orbit. Instead, it lies on the plane which passes through L1 and is perpendicular to the line connecting the sun and the earth, tracing out an elliptical halo orbit centred about L1. 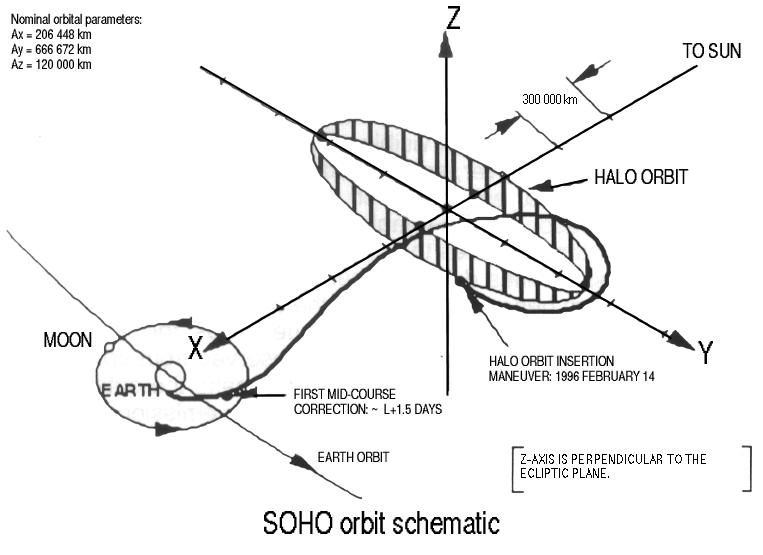 SOHO moves around the Sun in step with the Earth, by slowly orbiting around the First Lagrangian Point (L1), where the combined gravity of the Earth and Sun keep SOHO in an orbit locked to the Earth-Sun line. The L1 point is approximately 1.5 million kilometers away from Earth (about four times the distance of the Moon), in the direction of the Sun. There, SOHO enjoys an uninterrupted view of our daylight star. All previous solar observatories have orbited the Earth, from where their observations were periodically interrupted as our planet `eclipsed’ the Sun.
Credits: NASA

In June 1998, all contact with SOHO was lost. After weeks of silence, in August 1998, a powerful radar signal from Earth produced a faint echo from the spacecraft. As luck would have it, the spacecraft was still in the right place and sunlight would soon fall on its solar cells again, enabling it to resume operations. Other difficulties were presented in the form of loss of gyroscopes to control spacecraft orientation. An inquiry was set and it was concluded that the loss of SOHO was mainly due to ground errors rather than on board anomalies. It was a direct result of operational errors, a failure to monitor spacecraft status and a imprecise decision which disabled part of the onboard autonomous failure detection. After initial recovery,with only a single gyro operational, it was decided to push forth the ideation of a gyroless modeland on February 1st 1999, SOHO became the first three-axis-stabilised ESA spacecraft to be operated without a gyroscope.

After 25 years in space, SOHO has observed and provided a deeper insight into our sun on longer timescales. The star flips its magnetic polarity every 22 years and ramps up and down in activity every 11 years. SOHO has been able to observe both cycles completely. SOHO’s EIT has also observed several wavelengths of light that our impossible to observe from the Earth due to the atmosphere. SOHO was also the source of higher resolution data inspiring several other mission proposals. In addition to advancements in solar science, SOHO’s LASCO has discovered several comets too, most by citizen scientists and amateur astronomers who could access this data on the internet.
SOHO remains an unparalleled reservoir of ongoing data even with advancements in technology. It is an extremely ambitious mission according to the current US Project Scientist, Jack Ireland. He believes that if anything, SOHO is highly likely to do a complete breakdown of our sun and it’s workings. The originally planned three year mission completes 27 years this year will remain the best possible source of solar data in the near future. 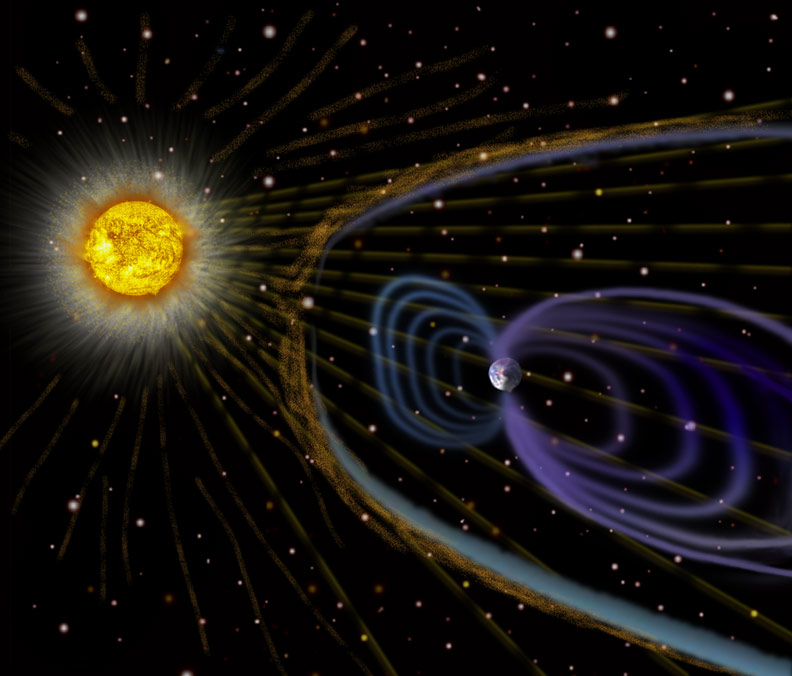