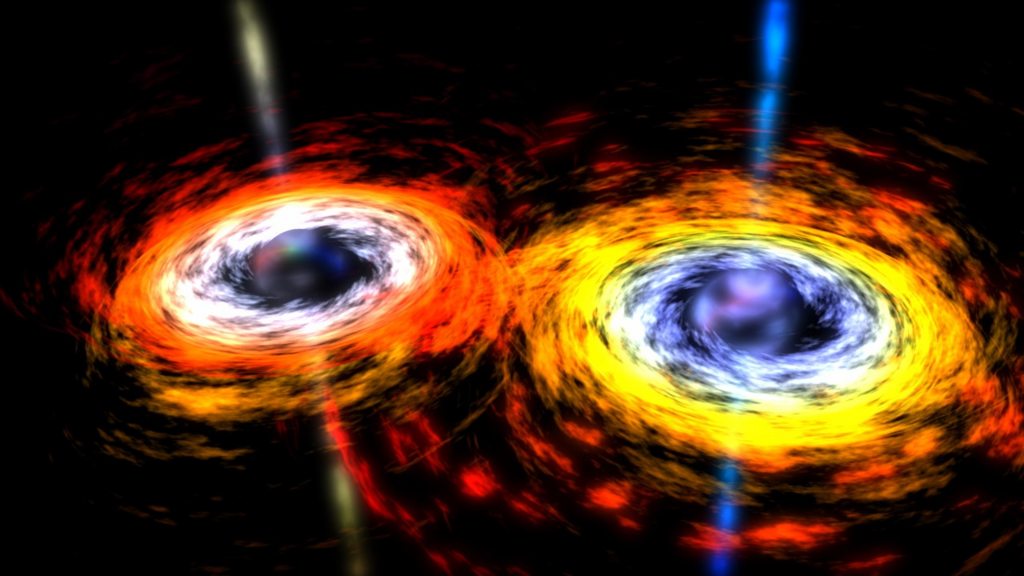 ←
PREVIOUS
One Of The Oldest Stars In The Universe Discovered

The study, which was conducted for more than 450 merging galaxies, has managed to observe multiple pairs of black holes in their final stage of mergers.

Led by University of Maryland alumnus Michael Koss, a research scientist at Eureka Scientific, Inc., with contributions from UMD astronomers, the team surveyed hundreds of nearby galaxies using data from multiple observatories and telescopes. The team used 10 years’ worth of data from the Burst Alert Telescope (BAT) aboard NASA’s Neil Gehrels Swift Observatory to shortlist their galaxies, and then sifted through 20 years’ worth of Hubble images to observe the galaxies, finally using the W.M. Keck Observatory in Hawaii to get sharper, clearer images of the mergers. This process, while quite arduous and painstaking, was quite effective and yielded crisp and clear results.

WHY ARE MERGING BLACK HOLES SO DIFFICULT TO OBSERVE?

Observing these black holes is difficult for several reasons. Firstly, when galaxies are locked in gravitational battle, they spew out huge clouds of dust and gas, which obscure the center of the merging galaxies. These clouds allow barely any visible light to pass through. Secondly, the merging of galaxies takes billions of years, while the coalescence of the black holes happens in a few million years; hence we are left with quite a small time period (on galactic terms) to observe them just before and during their merger. These 2 things present quite the predicament when trying to catch these black holes in their merging moments.

HOW DID THE TEAM OVERCOME THESE PROBLEMS?

Since the clouds covered the center of the galaxies, using visible light was not an option. The team had to resort to the use of x-rays and infrared light. Firstly, they reasoned that colliding galaxies would release bursts of x-rays, and such bursts would be noticed and recorded by an instrument called the Burst Alert Telescope (BAT). Meticulous examination of the past 10 years’ records of this machine yielded a list of potential colliding galaxies. The scientists then turned to Hubble’s records for confirmation of the source, as many astronomical events other than galactic collisions release bursts of x-rays. The team then had to comb through 20 years of records to finally obtain their list of galaxies. However, to their dismay, they discovered that the images from Hubble were not clear enough, as they were in the visible spectrum. As a remedy to this, the team used the W.M. Keck Observatory in Hawaii to get their images. The speciality of this observatory is that it can take images in the infrared and near-infrared region, and they photographed 96 of the 481 galaxies in this way. This method bore good fruit, and yielded sharp, crystal clear images.

The team targeted galaxies located at an average of 330 million light-years from Earth — relatively close by in cosmic terms. Many of the galaxies are similar in size to the Milky Way and Andromeda galaxies. In total, they analyzed 96 galaxies observed with the Keck telescope and 385 galaxies from the Hubble archive. The scope of their research, and their clever use of x-rays, knowing that they would break through the cocoon of dust, is what sets this research apart from previous attempts.

WHAT HAPPENS WHEN THE BLACK HOLES FINALLY MERGE TOGETHER?

The conjoining of galaxies takes billions of years; hence the mergers of black holes is also quite a lengthy process. In comparision to the time it takes the galaxies to come together, the coalescence of the black holes themselves is a short event, taking perhaps 10 or 15 million years. It is essential to observe the black holes in this elusive stage, and the team has managed to do just that. Out of all the galaxies they observed, about 17% of them had a pair of black holes at their center, slowly spiraling towards each other in a train wreck of astronomical proportions. But what happens when they finally merge into a monstrous, ultra massive black hole? In the coming 10 million years, most of these black holes will complete their celestial dance and become a single, huge entity, releasing massive amounts of energy in the form of gravitational waves. These waves can be studied by LIGO, the Laser Interferometer Gravitational-Wave Observatory which is built for that very purpose. Scientists hope to gather large amounts of information from these events.

WHAT HAVE WE LEARNT FROM THIS RESEARCH?

This research paper has answered many of the questions that had scientists scratching their heads for quite a while, the most important of them being the origin of supermassive black holes. For a black hole to become bigger, it has to keep eating huge amounts of matter, which scientists previously thought came from the gas and dust surrounding them at the center of their galaxies. However, this study has pointed out that these black holes can be formed during the coalescence of galaxies as well. It also gives us some insight into the fate of our galaxy, which is on a collision course with the nearby Andromeda galaxy. These galaxies will merge over the course of a few billion years in a violent and spectacular fashion, forming a bigger galaxy, and an even bigger black hole.

WHAT ARE THE FUTURE PROSPECTS OF THIS RESEARCH?

Future infrared telescopes, such as NASA’s highly anticipated James Webb Space Telescope (JWST) will provide even better views of the dusty, obscured centers of merging galaxies. It may even reveal information that was too subtle for the Hubble space telescope to pick up, as, in some cases, Hubble cannot resolve the two nuclei and they just appear as one. JWST will also be able to measure the masses, growth rates and other physical parameters for each black hole. Also, the work-in-progress Laser Interferometer Space Antenna (LISA) is another instrument made to measure gravitational waves, which will help in further studying any currently merging black holes.