←
PREVIOUS
“What to expect when a giant cloud of gas collides with your galaxy?”

The night sky is a treasure trove of wonders and secrets that had me enthralled ever since I was a kid. Random, scattered stars in the sky resolved themselves into majestic constellations as I learned more about the sky. Eventually, I discovered galaxies, star clusters, nebulae and much more as I “followed the night”, so to speak, and wanted beyond all else tolook at these Deep Sky Objects (or DSOs, for short). Here, like many others, I hit a wall. Photos taken by huge telescopes floating in the sky above us were beautiful enough, but for me it wasn’t enough. I wanted to look at them with my own eyes. I might not see an image as grand as seen by Hubble, but it would be worth much more to me. How, then, should one proceed?

Here, many budding amateur astronomers would get confused. Should I buy a pair of binoculars? Maybe a telescope? What kind, though? The long, narrow ones that they show in pirate movies, that’s a telescope too right? Should I get me one of those, an’ a wooden leg, an’ a parrot too, for the complete pirate experience? Or perhaps the more commonly known generic telescope that is attached to a 3 legged stand? Which of these is the best for me? Is it too costly? All of these questions can bog down a very promising and interesting journey to the stars, but hang on, me hearties, it’s not as complicated as you think!

There’s a looooot of stuff out there for an astronomer, but if you want to be a standard, backyard astronomer, then binoculars and telescopes are the two most common instruments that you will use. Which of these you should buy first depends on how much effort and investment you are willing to put in. A pair of binoculars, although a bit complicated to choose the right model, is quite easy to use. A few hours of practice and you’re good to go! Telescopes, well, they require quite a bit of practice and dedication to get the hang of, and generally take more time to set up and use. However, having got that out of the way, once you learn to use either of them, it’s well worth the effort!

Let’s start with a basic understanding of how these instruments work. All binoculars and telescopes have a large opening (or 2 large ones, in the case of our binoculars), that collect more light than our eyes do. More light means that light from fainter objects also reaches our eye, which we otherwise wouldn’t have been able to detect. This opening is called the aperture, and is a very important aspect of these instruments, as it will decide many factors, like how faint objects can we see, how big and heavy the lenses will be, what is the maximum magnification, etc. But more on that later. Once the aperture collects the light, it is “processed” by some combination of lenses and mirrors, magnifying the image in the process.

In the case of binoculars, we have 2 lenses, one called the “objective”, since it collects light from the object, and the other is the “eyepiece”, the one that we look into. The objective is the same diameter as the aperture, but the eyepiece is quite small, usually similar to the size of your eyes. As binoculars get bigger, it’s difficult to fit the eyepieces such that they are in line with your eyes, so the light is passed through “porro prisms” to adjust the path of light. These prisms are what give bigger binoculars the flared out structure.

Now, for the important part; what factors are the most important when looking for a good pair of binoculars? There are a huge number of factors and ratios that make up these instruments, but the major ones are the aperture, magnification (and hence field of view) and quality of lenses. The aperture, as discussed before, dictates the amount of light gathered; more light implies visibility of fainter objects. Obviously, we want as much light as possible, but the bigger the aperture, the bigger the objective lens gets, and in general we have a bigger and heavier instrument, which is cumbersome and difficult to hold up for long amounts of time. An aperture of around 50-70mm is desirable, as anything bigger than that will be too heavy to practically use while handheld (even 70 mm is pushing it!). Of course, binoculars with larger apertures exist, but they must be mounted on a tripod to get clear images.

Secondly, magnification is a bit of a debate; some people prefer seeing larger objects with more detail, while others like to see a larger part of the sky. Here is where the field of view comes in. It is basically how much sky can you see at your current magnification. FoV is generally expressed in degrees, and it shares an inverse relationship with magnification; larger the magnification, lesser the FoV. Although this might be down to personal preference, as a rule of thumb, if your binoculars are going to be your primary instrument, it would be better to choose one with higher magnification. If you plan on having a telescope too, then it is much better to get a pair of binoculars with a wider field of view, since the telescope will show you all the detail you need, and the binoculars provide a much-needed wider view of the sky. 8-12x is a good range of magnification to choose from.

Finally, we come to lenses. Buying a pair of binoculars with good quality lenses is of paramount importance, but often overlooked. Lenses decide how well the light is collected and processed, and finally how good an image you get. Although better lenses makes the binoculars costlier, it is very well worth the money in the long run. Cheaper lenses have a host of problems pop up as they grow older, like colours splitting up, objects at the edge of your FoV getting distorted, etc. Buying a pair with good quality, fully multi-coated lenses with BAK-4 prisms will shelve all these problems for a good 8-10 years! So if you have the budget, definitely go for better quality lenses. Apart from these, there are a number of other factors too, like eye relief, weather durability, etc. Although these are significant too, the major factors are aperture, magnification and lens quality. Generally a good manufacturer will provide good lenses, and better overall quality, so try to stick to the well known companies like Orion, Bushnell and Celestron. I have an ancient pair of binoculars of the Cobra Breaker series; they are well over 15 years old, but the lenses still have their coating intact, and they still deliver crisp and clear images, and I use them almost every week. That is how durable a good pair of binoculars can be!

Summarising, you should buy binoculars according to how much use they will be put to, and whether they are your main instrument for stargazing. 8×48 – 12×70 is a decent range to pick from (00×99 means 00 is magnification and 99 is the aperture of the objective). I’ve put links to a few binoculars at the end of the article, do check them out to understand the varieties!

A 10×50 Orion piece that is very spectacle-friendly. 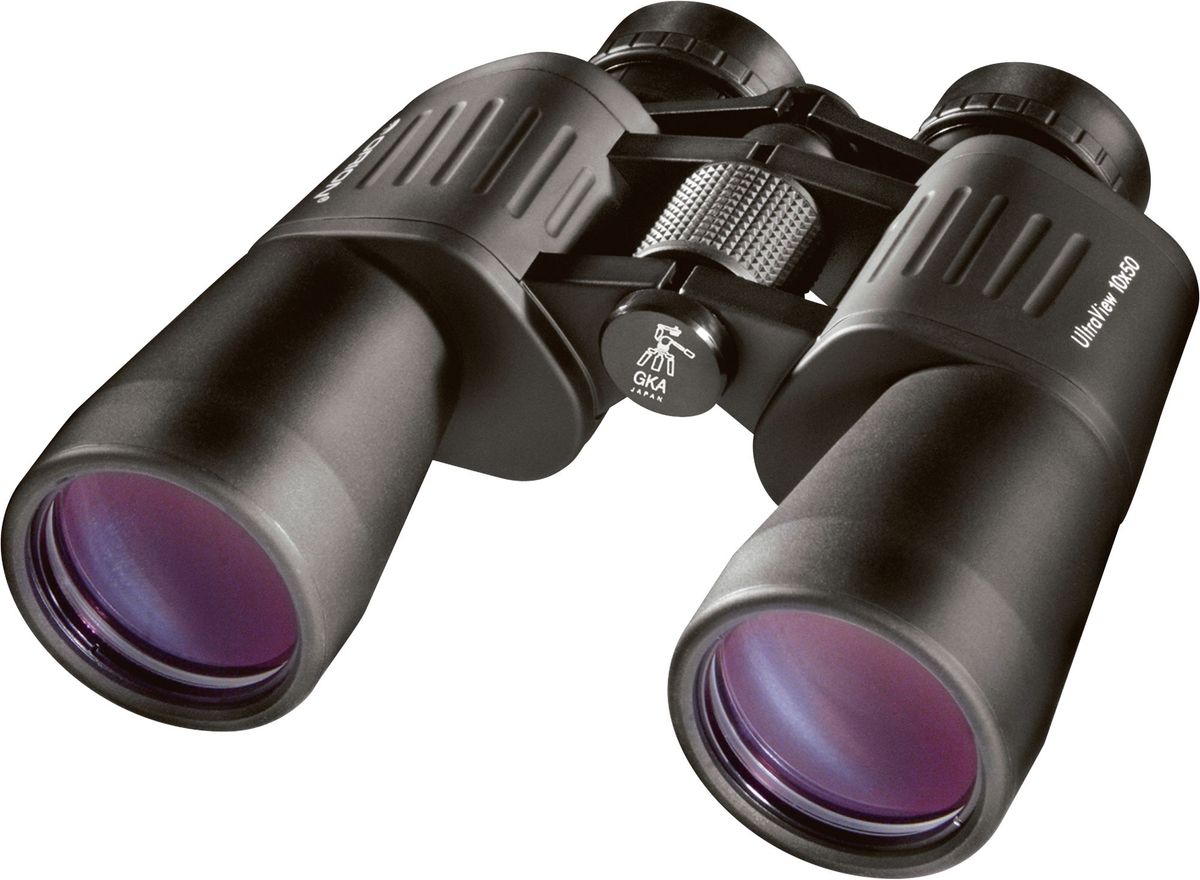 A 15×70 monster by Meade, another good producer of astronomy equipment. Bigger models are tripod compatible, so you can use them without having to hold them up.
Meade 15*70 Astrobinoculars

Another very popular combination, 20×50 by Bushnell. It has fewer lens coatings so is a bit cheaper, if your budget is tight!
Bushnell-20*50