←
PREVIOUS
For the First Time, Orbiting Supermassive Black Holes Have Been Observed

Boyajian’s Star: The star which is slowly losing its soul

In science, we do not simply accept theories. Every new discovery goes through a series of steps to establish itself. If we see a streak of light in the sky, we cannot jump to the conclusion that it’s a UFO landing on earth. Most probably it is a meteor. But to establish that, we have to think in a logical manner to reach the right conclusion. But what if all the evidence point towards the most unlikely occurrence? Once you eliminate the impossible, whatever remains, no matter how improbable, must be the truth. This is what happened when the world of astronomy shifted its gaze toward the star KIC 8462852 better known as Boyajian’s star during the Kepler’s mission. Kepler space program was launched by NASA to find Earth like planets in other solar systems. It does so by measuring the dip in the brightness of star when the planet of its system pass in front of it. Depending upon how large is the dip in the intensity of light measured, the size of the planet is calculated. The passing is known a transit: When a planet whose orbit is aligned to our line of sight passes in front of a star blocking a part of it’s light.

When the Boyajian’s Star was first observed, the data of the transit suggested that whatever passed from in front of the star had the size of Jupiter. Now, normally a transit lasts for a few hours, but this transit lasted for weeks and it was asymmetric. 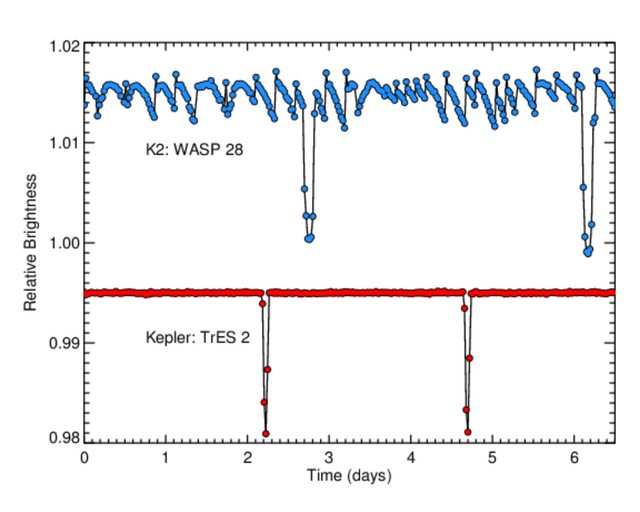 In the transit, the dip observed is rarely more than 1 percent of the intensity of star light. On March 2011, a 15 percent dip was observed from the transit of Boyajian’s star. Then in February 2013, a series of dips were observed. Some lasted 1-2 days, some for weeks, for a period of 100 days, at last when, the Kepler mission ended. This time, the dips were almost 20 percent i.e. the object had an area of one thousand times that of Earth. 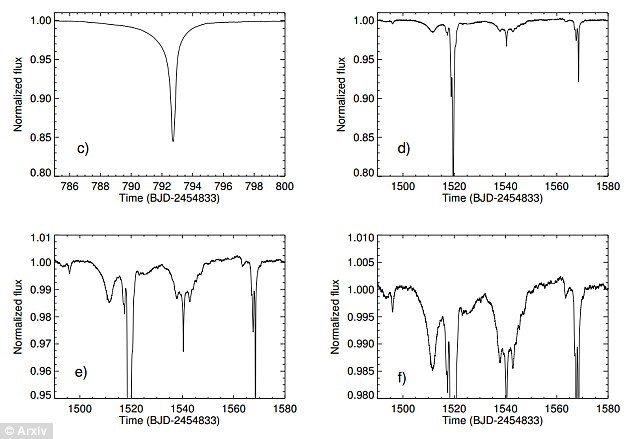 Various hypotheses were proposed to explain the data collected by Kepler. The first suggested the presence of Protoplanetary debris disk. This only happens when a star is young, which this star was not. The second was Catastrophic collision, very similar to Earth-Moon formation. If it was indeed the case, then a glow must have been observed due to the heating of the debris from the heat of the sun in the form of infrared rays, which was not observed. As both the hypothesis failed to explain the data, they were rejected.

The other explanation was that a huge swarm of comets orbits the star in a very elliptical orbit. It would take hundreds of comets to match the collected data, and those comets will be the ones between our line of sight and the star, suggesting that the total number may be in thousands. Also, this many comets means the presence of lots of dust which was already proven to be absent.

Due to the 20% dip, the object must be as large as the star itself, so that rules out planets, which can have a maximum radius of 50,000km. Stars can also be excluded and Boyajian’s Star has no nearby companion. So what is the possible explanation of these observations?

This is the part where it gets interesting. Let’s first see a picture, a representation of what is proposed as a possible explanation. 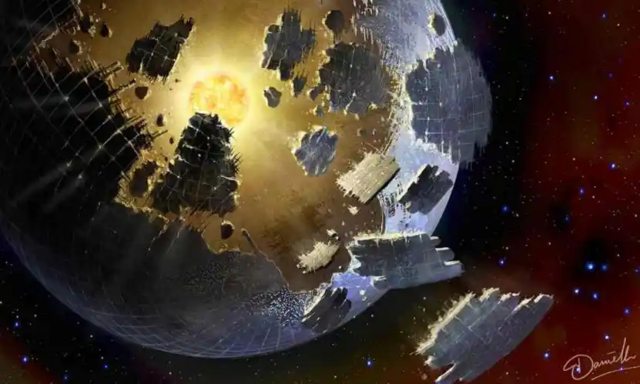 What we see here is a giant mega structure around the star. The explanation that was proposed says that it is possible that an advanced alien civilization, which has already exhausted its planet’s resources, is using the star as its energy source and has built giants solar panels around the star. The size of a single component of this structure is around 25 million miles. This will explain the deep dips and the asymmetry of the transit. But this is still only a hypothesis and a very unlikely one at that. But who knows, this maybe the first sign of an intelligent species outside our planet. We will let the future decide that.