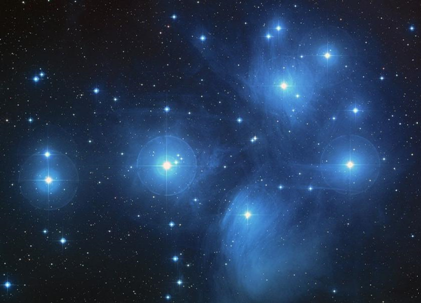 The Pleiades star cluster is also known as the Seven Sisters or M45. It is visible from virtually every part of the globe. We can see it from as far north as the North Pole, and farther south than the southernmost tip of South America. It looks like a tiny misty dipper of stars. They are a group of more than 800 stars located about 410 light-years from Earth in the constellation Taurus, the Bull.

It is an example of an open star cluster, a group of stars born around the same time from a gigantic cloud of gas and dust. The brightest stars in the formation glow a hot blue and formed within the last 100 million years. With life spans of just a few hundred million years, they are incredibly luminous and will burn out rapidly, far less than the billions of years our sun will enjoy.

The star cluster takes its English name from the legends of Greece. The Pleiades are the seven daughters of Atlas, the Titan king, and Pleione, the ocean nymph. Atlas revolted against Zeus, the king of the gods, during an ancient battle, who then sentenced his opponent to keep the heavens forever on his shoulders. The sisters were so sad that Zeus allowed them a place in the sky to be close to their father.

The first astronomer to view the Pleiades through a telescope was Galileo Galilei. He thus found that many stars in the cluster are too faint to be seen with the naked eye. In March 1610, in his treatise Sidereus Nuncius, he published his observations, including a sketch of the Pleiades showing 36 stars. 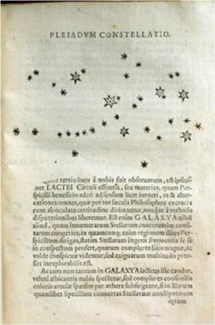 In 1767, John Michell determined that the likelihood of a chance alignment of so many bright stars was just 1 in 500,000, so it surmised that the Pleiades and many other star clusters must be physically related. When studies were first made of the stars’ proper motions, it was found that they are all moving in the same direction across the sky, at the same rate, further demonstrating that they were related.

Charles Messier measured the cluster’s position and included it as M45 in his catalogue of comet-like objects, published in 1771.

Messier 45 contains several hot, blue, extremely luminous B-type stars and is one of the nearest star clusters to Earth. It has a core radius of 8 light-years, and its tidal radius extends to about 43 light-years. The cluster is home to more than 1,000 confirmed members, but only a handful of these stars are visible to the naked eye. The total mass of M45 is estimated at 800 solar masses.

The cluster contains many brown dwarfs, which are objects with less than about 8% of the Sun’s mass, not heavy enough for nuclear fusion reactions to start in their cores and become proper stars. They may constitute up to 25% of the cluster’s total population, although they contribute less than 2% of the total mass. Astronomers have made great efforts to find and analyse brown dwarfs in the Pleiades and other young clusters because they are still relatively bright and observable. In contrast, brown dwarfs in older clusters have faded and are much more challenging to study. 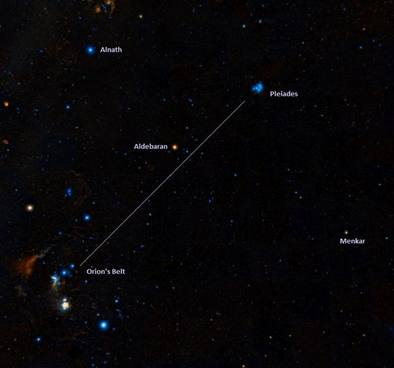 The Pleiades cluster is straightforward to find. It is located about 14 degrees northwest of Aldebaran, the brightest star in Taurus and 14th brightest star in the night sky. When the cluster is high in the sky, it can be located by following the line formed by the three bright stars that form Orion’s Belt: Alnilam, Alnitak and Mintaka. M45 lies to the northwest of the celestial Hunter. 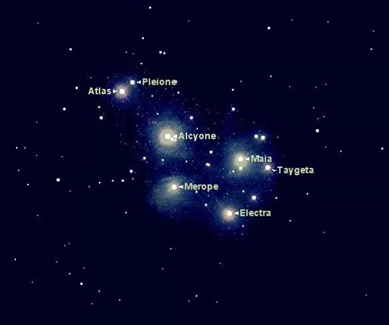 The nine brightest stars of the Pleiades are named for the Seven Sisters of Greek mythology: Sterope, Merope, Electra, Maia, Taygeta, Celaeno, and Alcyone, along with their parents Atlas and Pleione. By pointing Kepler at the Pleiades, researchers confirmed that six of the Seven Sisters — Alcyone, Atlas, Electra, Merope, Taygete and Pleione — are slowly pulsating type B stars, which change in brightness over the course of one day. The seventh star, named Maia, has a brightness that fluctuates over a more extended period of 10 days.