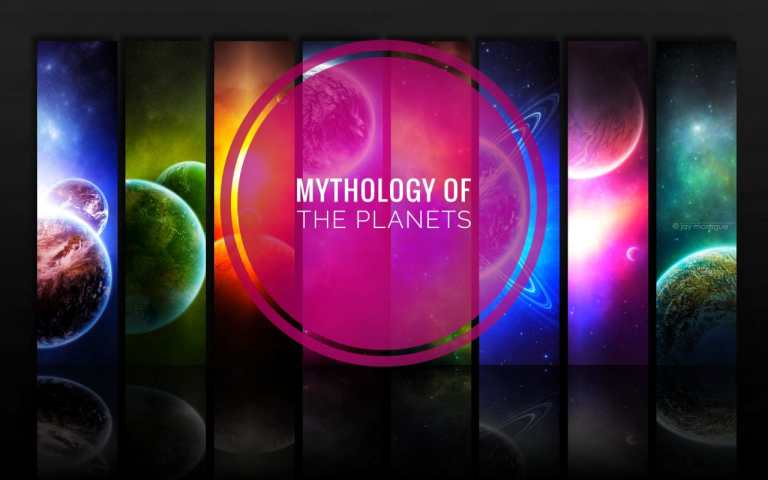 The Mythology of Planets

Looking up at the night sky always inspires in me a feeling of great wonder, of silent admiration. They have been here since the beginning of time, and have seen it all. If only they could speak, the stories they could tell us! Orion, the mighty hunter, what stories might he tell, of the fascinating beasts he has slain? What would Hercules tell us, tales of his twelve labours? Would Mars boast of all the battles he has conquered, and all the kingdoms he has ground to dust? Every constellation, star and planet has a story to tell, and it is up to us to listen. But whence do these stories come from?

Most of the credit of the names and stories of almost all objects in the northern hemisphere of the night sky go to the ancient Greeks and Romans. The Greeks wove their rich mythology into the stars, turning gods, heroes and monsters into constellations, and thus making them truly immortal beings. The Romans, consequently, named the planets after their gods, accurately reflecting their characteristics. Many of the constellations are involved in the same story, making the night sky an intricate compendium of myth and beauty.

The mighty Greek and Roman empires were built, in large part, due to their belief and trust in their gods, whom they thought always watched over them. And who better to be the silent guardians then the planets themselves, eternal, mystical, and ever so distant yet so powerful? And hence came into being the names of the planets, believed to be the gods themselves, aiding them in all their endavours.

Mercury, named for the speedy messenger god, revolves fastest around the sun;

Venus, named for the Roman goddess of love and beauty, shines brightest in the sky and is the most beautiful of all planets. Many legends revolve around Venus, to explain several oddities in it’s revolution. When we plot the position of Venus from an Earth centered perspective, Venus reaches the exact same position in the night sky every 8 years. Even more interesting is the fact that if we plot the positions of Venus every day for 8 years, the planet traces out a lovely, 5 petalled rose in the night sky. This association with the rose relates it to all that is feminine, and what better to represent femininity then the Goddess of beauty herself?

When we look at Mars, the most striking factor in its appearance is its bright red colour. Instinctively, we associate red with blood, violence and danger. The Romans took this as a sign of impending war from Mars, the god of war, warning them to ready their weapons and armies. Even the two moons of Mars, Phobos and Deimos, are named after his children, who always accompanied their father in battle. Phobos would remind his adversaries of their worst fears and Deimos would terrorize them with horrifying apparitions. In fact, such was their influence that the modern day word “phobia” derives from Phobos.

Jupiter, the mightiest god of all, is aptly the biggest planet in our solar system. Even the 4 major satellites of Jupiter, Io, Ganymede, Callisto and Europa, are all beautiful women that Zeus, the Greek form of Jupiter, desired, and were taken by force as his consorts. Again, several anomalies come to mind. As we know, the Romans had no way of knowing the size of the planets, and consequently they shouldn’t have known that Jupiter was the largest planet in the sky. Yet, they named the biggest planet Jupiter, after the king of the gods, the mightiest of gods. Was it a coincidence, or did they somehow know the sizes of the planets?

Saturn, the god of time, revolves the slowest around the sun, leisurely taking his time. Saturn is also the god of agriculture and civilization, and is also worshiped as the founder god of the Roman empire. This, along with being the father of Jupiter, was enough to earn him a place among the planets.

These are the most important planets in Roman mythology, as the rest of the planets were discovered only after the invention of the telescope. Uranus is an exception in the sense that it is the only planet named after a Greek god, the god of the sky, watching over all of creation from afar.

Neptune is named after the god of the sea, possibly due to its watery blue colour. It is important to note that Uranus and Neptune were not named by Romans, as they did not have telescopes. These 2 planets were named by scientists after the discovery of the telescope, in keeping with the rest of the mythological names.

Even Pluto was named after the Roman god of the underworld, because of its mysterious nature and other-worldly distance from the sun. In a way, the gods of old still rule over us, dictating the motion of our solar system with their divine powers. The influence of the Planets on the Greeks and Romans was considerate, and largely responsible for the immense expansion of their empires. In a way, their fascination with the planets was understandable, as planets represent something entirely different from our daily lives, and have an aura of mystique and power shrouding them. Even today, the planets are, for me, something that I cannot completely understand, either due to their distance or uncomprehending size. They are always a source of inspiration and wonder for me, and I hope that they will become one for you as well.