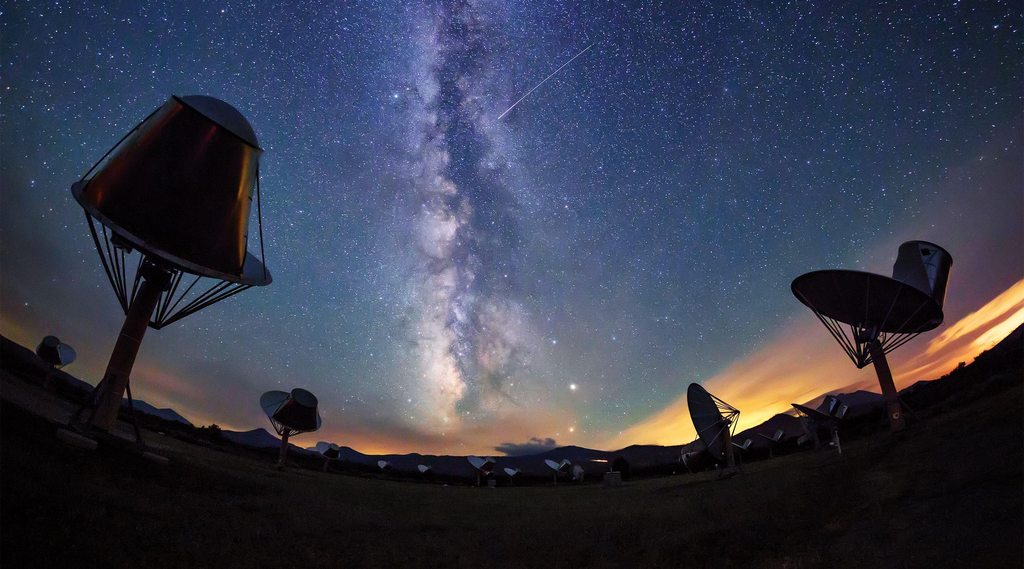 ←
PREVIOUS
The Mythology of Planets

Our Universe In The Radio Spectrum 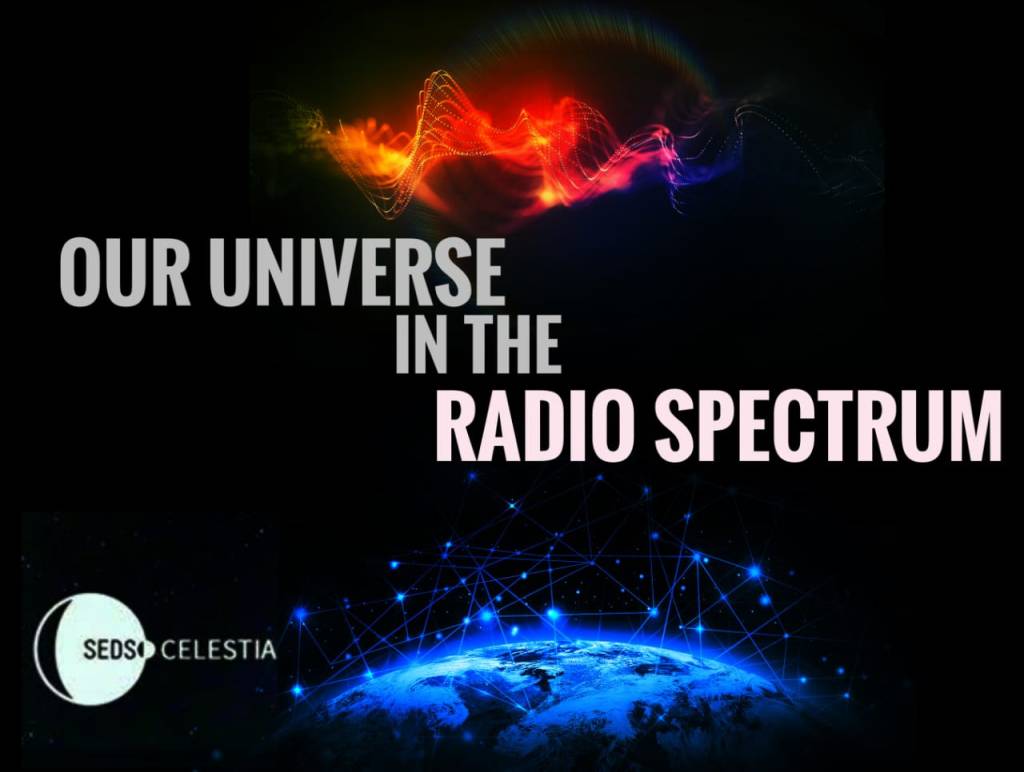 Often we have looked up at the night sky and seen the hundreds of tiny dots blanketing the sky. One look at these stars, planets, nebulae and galaxies, and one is left marveling at their beauty. However, what we are able to see through our eyes and our optical telescopes, is but a small portion of a very large and very amazing universe. This is because visible light occupies a small part of the electromagnetic spectrum, and if we tune our instruments to ‘see’ the other regions of the electromagnetic spectrum, we are greeted to new and wondrous ways of looking at our universe and observing how it behaves. One of the most interesting regions we can view the universe in is the radio spectrum, and it is so interesting because although bright stars and galaxies do emit visible light, almost everything in the universe, from gas clouds to planets, emit radio waves and so being actually ‘visible’ in the radio spectrum. Thus, viewing the universe in the radio spectrum essentially allows us to see celestial objects which we couldn’t through the visible spectrum. As a bonus to that, radio waves are much less scattered than light rays, and thus can travel further without losing much of their information, hence becoming a better means of information about their sources. One more advantage that the radio spectrum offers is that it enables the study of the early stages of the universe. This is because the farther we look into the observable universe, the farther back in time the electromagnetic radiation coming from those regions is, and this radiation, although originally in the visible and infrared spectra, has been red-shifted to the radio spectrum. Thus, radio astronomy has become an indispensable tool in studying the cosmos today, but how did it all begin? 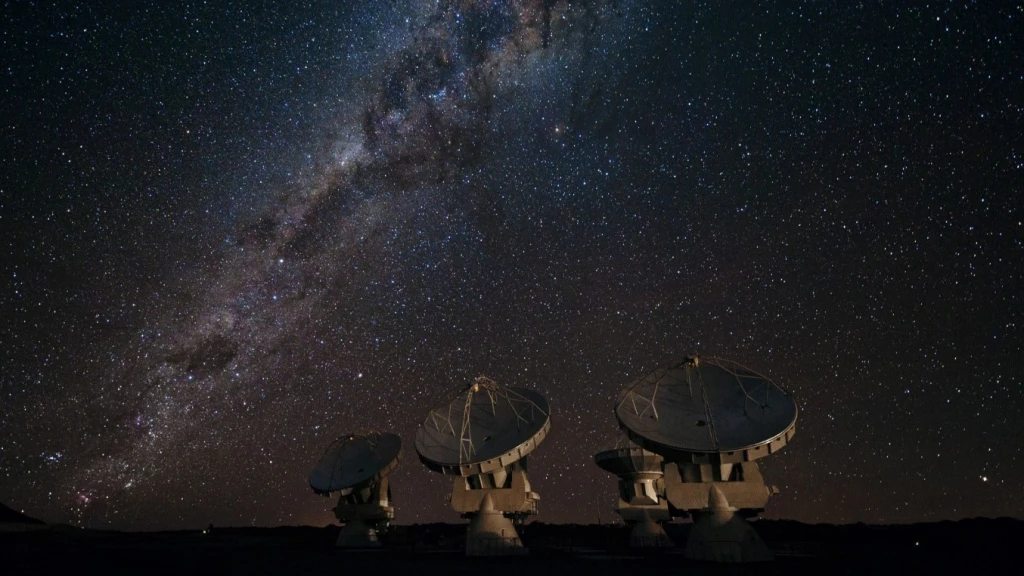 The Discovery of the Radio Spectrum 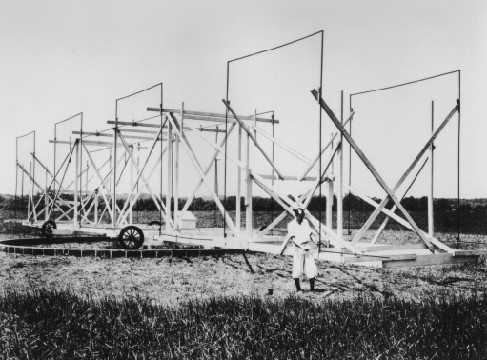 The utility of radio waves in astronomy and astrophysics was found by accident in 1933 by Karl Jansky, who was then working for Bell Laboratories on a phone system that worked across the Atlantic Ocean. However, during certain times of the day, a ‘hiss’ or a static sound was observed in the background of the calls made. Karl Jansky soon observed that the hiss was coming from the direction of the center of our galaxy. We know today that the center of our galaxy is a very active region, and emits a large amount of radio waves, particularly due to the presence of supermassive black holes like Sagittarius A*, but back then, this was a ground-breaking discovery. Jansky had detected radio waves from space, opening up a new, invisible universe. 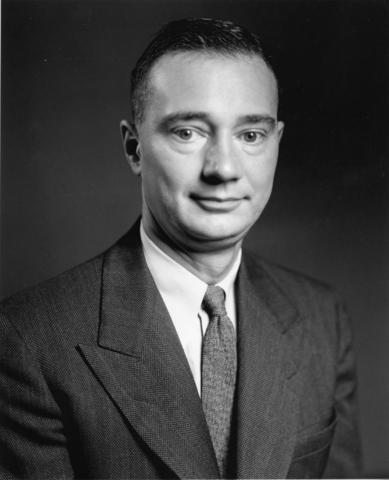 Following Jansky’s discovery and subsequent research on the radio sources beyond our solar system, a man by the name of Grote Reber built his own radio telescope in his backyard in 1937, and used it to look at the whole sky and catalogue radio sources. From the data he collected, he built the first map of the ‘radio sky’, thereby ushering forward the concept of radio astronomy.

Thus, radio astronomy started with accidental discoveries and backyard scientists. Today, it is one of the major branches of astronomy, spearheading the way we look at the universe. From the discovery of the Cosmic Microwave Background Radiation to obtaining the first image of a black hole, peering into the radio spectrum has led to some amazing breakthroughs. 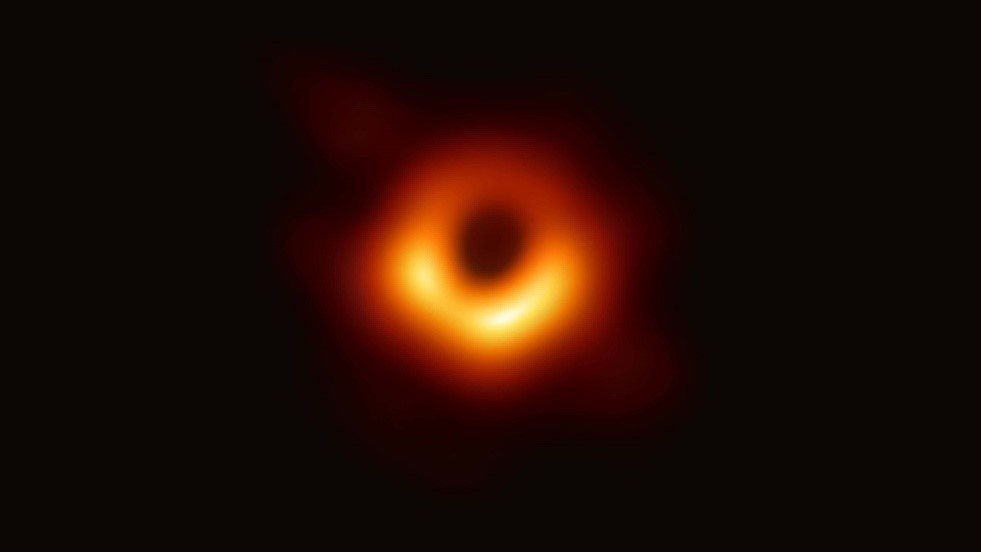 About a year ago, the first ever image of a black hole was captured by the Event Horizon Telescope, which is actually an international collaboration that uses radio telescopes all over the world to perform Very Long Baseline Interferometry (VLBI). VLBI is basically using receivers (in this case radio telescopes) to perform interferometry over very large distances, which the Event Horizon team used to measure the emission regions and map the areas around two supermassive black holes with the largest apparent event horizons – SagittariusA* at the center of the Milky Way and M87 in the center of the Virgo A galaxy. By synchronizing eight telescopes across the world (Spain, Hawaii, North and South Americas and the South Pole) to within a fraction of a millimetre using atomic clocks, the EHT aimed them at M87 in April 2017 for 10 days. In those ten days, the telescopes recorded in total 5 petabytes of data, which was sent to a centralized location and combined to create a composite set of images, which revealed something that human eyes had never seen before – the event horizon of an actual black hole!

Credit: EHT Collaboration
The EHT had to have a really high resolution so as to properly image the apparently tine black hole.

Where Radio Astronomy comes into play is because these black holes are very far away, and have a lot of ‘pollution’ between us and them. Thus, light coming from them gets scattered much more than radio waves. More importantly, the accretion disks around these black holes are brilliant sources of radio waves, thus making them shine brightly in the radio spectrum. Hence, trying to image the black holes in the radio spectrum instead of the visible one lead to much better results and one of the greatest discoveries for humans. 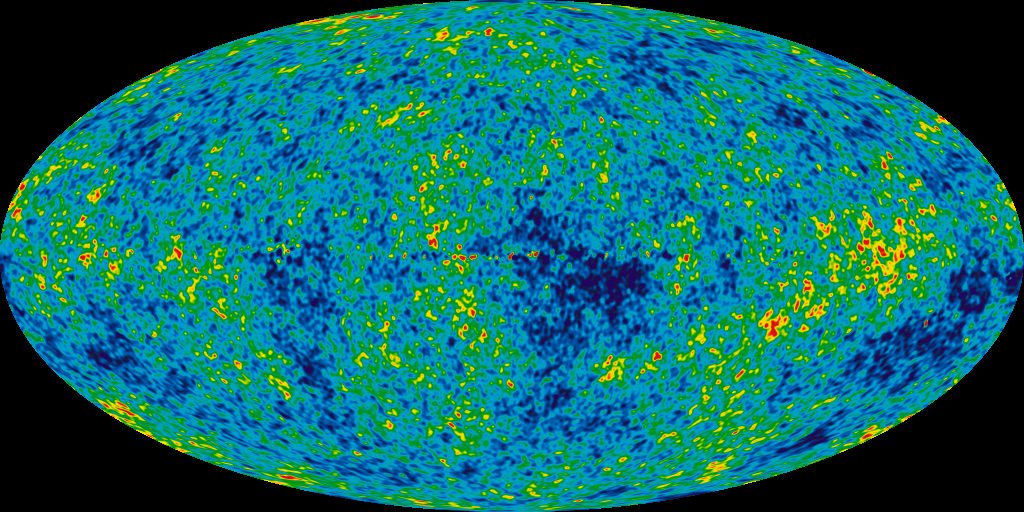 The Cosmic Microwave Background Radiation is electromagnetic radiation from the early universe, which can be detected in every direction. The CMB represents the ‘earliest’ radiation that can be detected. By earliest, I mean that before the creation of the CMB, the universe was so dense that photons could not travel freely, making it opaque. Thus, no radiation before the CMB has been detected, because the CMB is from the Recombinant Era, where electrons and protons interacted to form hydrogen atoms, and before which, there was just a cosmic soup of electrons and protons so energetic and so densely packed together that any photon emitted was absorbed. As the universe cooled down during the Recombinant Era, the hydrogen atoms formed were able to photons which were not absorbed and persist even today as the CMB. Due to the expansion of the universe, and having travelled for so long, the photons have lost a lot of energy and red-shifted to the radio and microwave spectrum, thus being detectable only by radio telescopes. 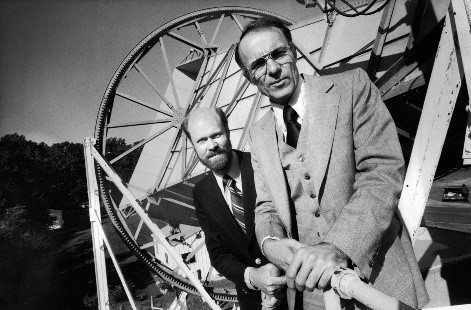 The Cosmic Microwave Background was first detected by Arno Penzias and Robert Wilson in 1963, when they were studying microwave signals from the Milky Way. They found background noise of unknown origin in their observations, regardless of where they pointed their instruments. At first, they thought that this was because of pigeon droppings, but even after removing all the pigeons from their instruments’ environment, they were still getting these readings. Moreover, these readings were coming to be more or less uniform from all directions. Thus leading to the discovery of the Cosmic Microwave Background Radiation, which is one of the biggest evidences of the Big Bang.

‘We are embedded in shells of cosmic time, and the final one, is fire.’

What the CMB tells us, with its red-shift and uniformity in all directions, is that the universe has been expanding uniformly in all directions, meaning that it has to have come from a singularity or the like as predicted by the Big Bang Theory. The other contender, the Steady State Theory, which said that the universe has existed as it is forever, was thus disproven. If the Steady State Theory was true, we would not have got the CMB as being red-shifted, and it would not be uniform in all directions due to clumping together of matter to form galaxies and superclusters, and would have otherwise been in spots throughout the universe, much like the radio signals coming from the universe are today.

Making a Map of The Universe

The Galactic and Extragalactic All-sky MWA survey, or GLEAM, is one of the largest sky surveys of all time, conducted using the Murchison Widefield Array (MWA) in Australia. Although many sky surveys have been done before, and many sky-maps made, none have been of this scale. GLEAM scans the entire sky for radio waves, then identifies and catalogues their sources. Through this, astronomers have been able to find features like soap bubbles, which mark sites of ancient supernova explosions. This is where massive stars ran out of hydrogen fuel, imploded, and then exploded outward, creating a shell of radiating plasma expanding into space. In the past, astronomers have found far fewer of these supernova remnants than are needed to account for the high-energy electrons that produce the synchrotron glow of the galaxy. Fortunately, GLEAM is perfectly suited to detecting these missing remnants, solving a cosmic puzzle. GLEAM is thus being used to look for answers to some of the mysteries which have puzzled cosmologists and astrophysicists for over a decade. 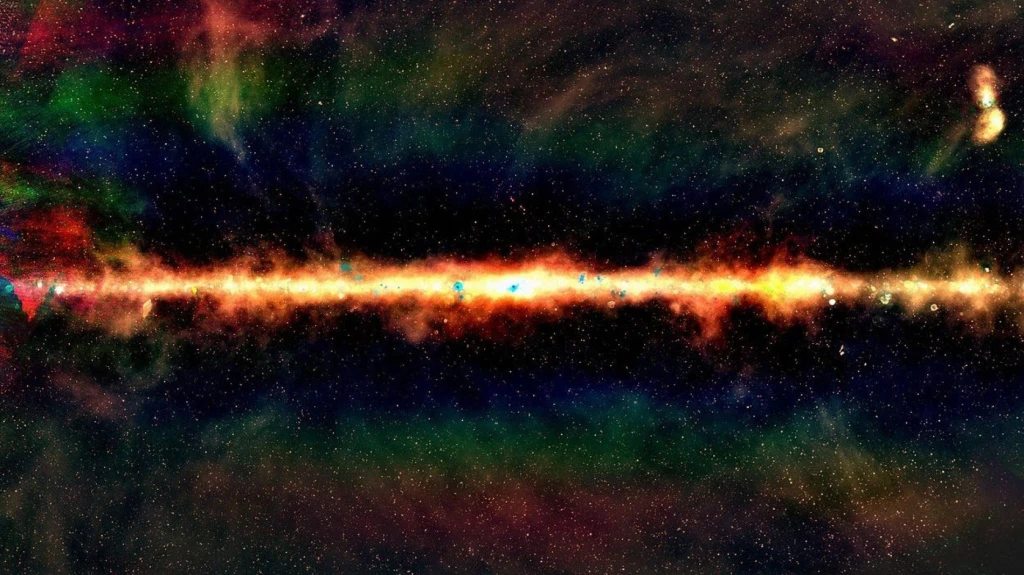 Hence, we see that radio astronomy has become an indispensable tool for peering into the universe with a new set of eyes. From confirming discoveries to travelling to the edge of the universe and uncovering the mysteries that lie just beyond the reach of our eyes, looking at the universe through the radio spectrum has been a fascinating and humbling experience for us human beings, showing us that there is a huge mountain of information left to be explored and discovered.