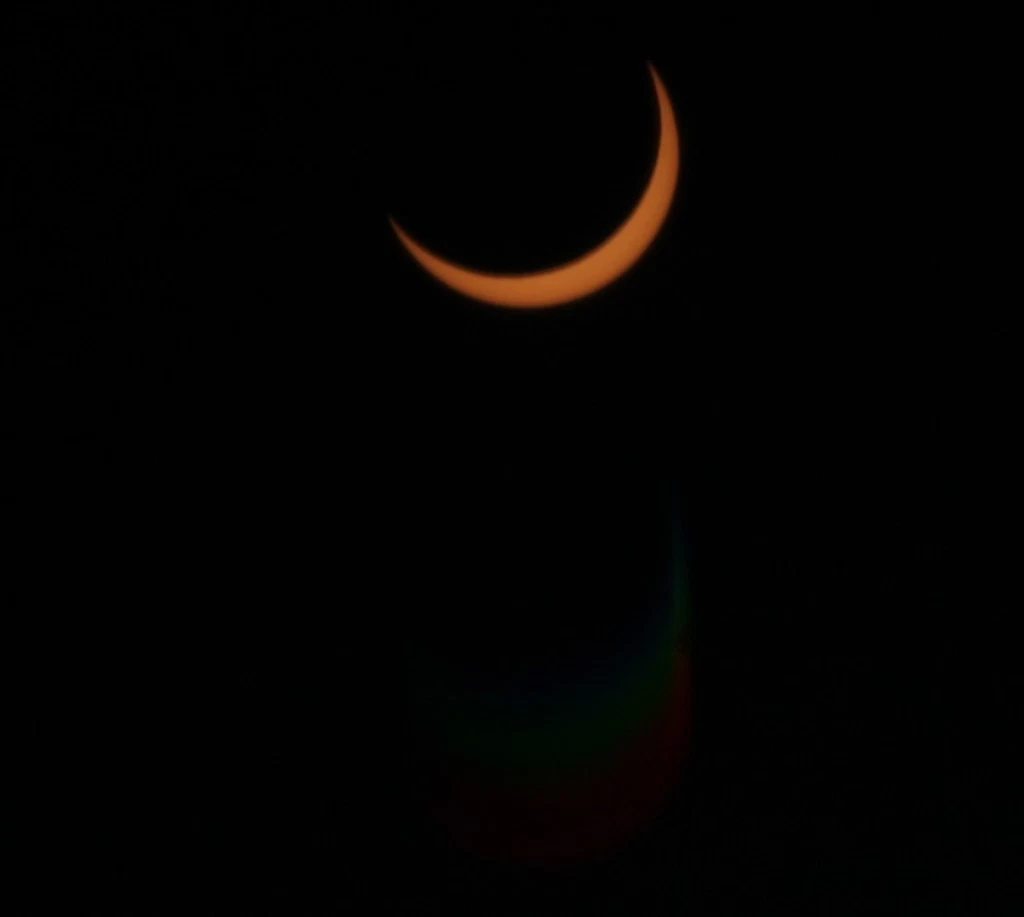 “If this could be repeated every day for a year, I would never budge from where I stood” -Wendy Mass

Solar Eclipses are a sight to behold. They are often called ‘the nature’s greatest coincidences’ and continue to fascinate people from all around the world. So, in this article, lets get to know everything there is to know about Solar eclipses. 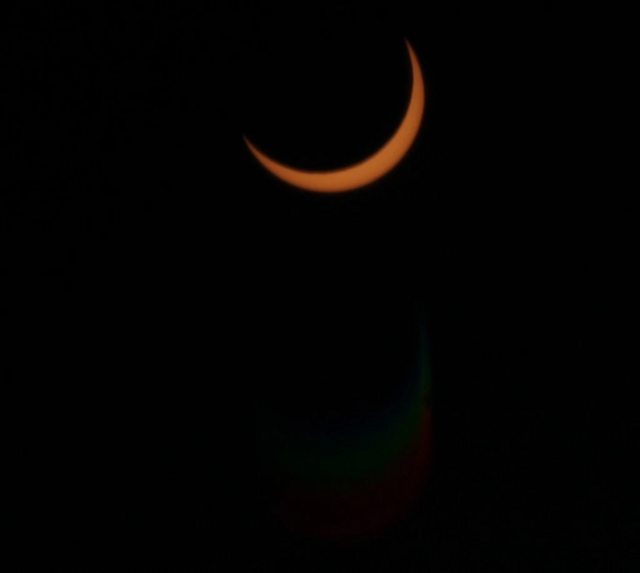 A bit about the history…

Humans have documented solar eclipses for millennia. References to them can be found in humanity’s earliest texts, such as the ancient Chinese academic documents. In China, solar eclipses were thought to be associated with health and prosperity of the emperor, and failure to predict one will put the emperor’s life in danger. Legend has it that 2 astronomers Hsi and Ho, were executed for not predicting the solar eclipse which occurred on 2 October 2134BC, making it one of the earliest known sightings of a Solar Eclipse.

Debate even swirls around a line from Homer’s Odyssey — ”The sun has been obliterated from the sky” — and whether it can be tied to a historic eclipse. 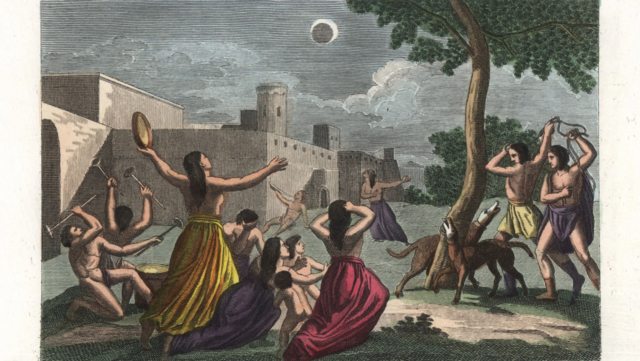 A painting about the solar eclipse from Italian painter Giulio Ferrario(1842). Pretty funny when you imagine all of this happening in ancient times ain’t it?

The science behind solar eclipses.

I’m pretty sure the readers of this blog know how a solar eclipse happens right? So I’m not gonna bore you with the basics. We are gonna go pretty deep in this one, right into the juicy stuff. But you might say, “c’mon! Its just an eclipse! What’s so interesting in it?”. For that I’ll simply reply, “You’re in for a ride!!”

Geometry of an eclipse.

Every school boy knows why a solar eclipse happens! A solar eclipse(Partial, Total or Annular) occurs when the moon comes between earth and the sun. This occurs only on new moon days. The solar eclipse becomes total in those areas of the earth where the shadow of the moon (called umbra)is swept. The size of this shadow is about 260 km. There is a remarkable coincidince that makes total solar eclipses occur. The sun is about 400 times bigger than the moon, but the moon is 400 times closer top the earth than the sun(How cool is that!!). We are indeed very fortunate to have this celestial coincidence.

But why don’t we have a solar eclipse on every new moon day ?

The reason behind this is the peculiar(but interesting!) nature of the orbits of earth and the moon. You see, the orbit of the moon is ‘wobbly’ The plane of orbit of the Moon around the Earth can change its inclination to the Earth’s orbit around the Sun by about 5 degrees. The points where the orbits of the moon and earth intersect are called ‘nodes’. A solar eclipse can only occur when the sun is near one of the nodes. During the year, the sun crosses the nodes of the moon twice and this is when solar eclipse can happen. A solar eclipse must occur each time the Sun approaches the node about every half year. An eclipse alert begins whenever the Sun is within about ± 15 degrees of the node and lasts for about a month. It is possible to have two partial solar eclipses within a month, when the Sun is in the vicinity of the nodes. The closer the Sun is to the node, more central is the eclipse. If the Sun were within 10 degrees of a node, a central eclipse should occur somewhere on the Earth. Depending on the moons distance from the sun, the eclipse can be annular or total. 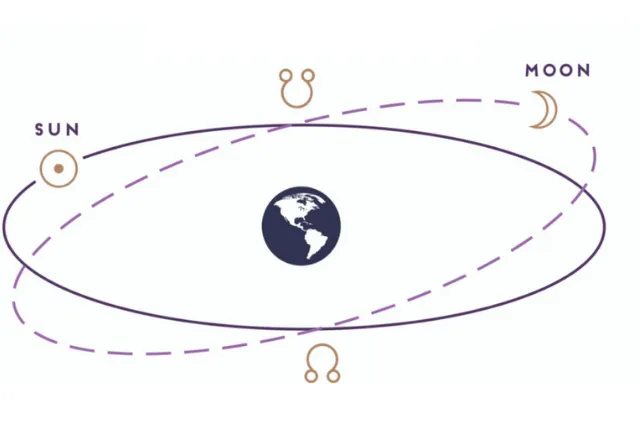 Wait wait, does this mean that eclipses always occur at fixed timed in a year?

Sadly, no. The eclipse year does not correspond to a calender year. This is due to an effect called ‘regression of nodes’ which is caused by the tidal effects of the sun and the earth in the moon’s orbit. To put it simply, the moon’s orbit spins with the moon. The change amounts to 19.4 degrees per lunar month and the eclipse year is shorter than the calendar year by 18.62 days. This results in the migration of eclipse seasons by 18.62 days every year.

Check out this video for visual representation of regression:

Ok that’s cool, but exactly how many eclipses can we see in a year?

We have seen that eclipses occur in 2 seasons per year. Since the calender year is longer than the eclipse year by 18.62 days, we can have 2 1/2 eclipse seasons a year. As 2 eclipses , both partial, can happen a month apart in one season, we can have at-most 5 solar eclipses (4 partial and 1 central in one year). This is only for the partial and annular eclipses . The total eclipses are pretty rare, and we can calculate why.

The probability of us being on the path of a total eclipse is given by the ratio of the two, which is 1/343.Total eclipses occur on an average of one every 1.5 years . Therefore one could expect to see a total eclipse at a particular location on the Earth once in 343×1.5 = 514 yrs.

Take any solar eclipse date and add 6585.32 (18 yr 11.3 days). That date will also be a solar eclipse! The reason for this repetition is that in 6585 days, the moon completes 223 lunations(lunar months) of 29.53 days, while the sun completes 19 eclipse years of 346.62 days each and both return to the same relative positions near the nodes .Such cycles of eclipses form a Saros family. There are many such Saros cycles concurrently in existence.

Now lets steer from geometrical to the practical. Apart from the glorius sights, the total solar eclipses also shown the previously hidden parts of the sun. Yes, you guessed it right, it’s the Corona, the mysterious outer atmosphere of the sun. At other times, even if the Sun is blocked out, the light from the bright solar disc (called the photosphere), gets scattered into the line of sight by molecules and dust of the terrestrial atmosphere and this scattered light is still several orders of magnitude stronger than the faint corona. So from the surface of the Earth the corona can never be seen. But due to the advent of the space technology, corona has become more accessible but from the space. Many spacecrafts keep a close watch at the sun’s corona. Some of them being Solar and Heliospheric Observatory (SOHO) and Transition Region and Coronal Explorer (TRACE).

Scientific studies of the solar eclipses began with the eclipse of 1842 which crossed southern Europe. One of the most scientifically rewarding eclipses took place in 1868 in peninsular India. An American astronomer W.W Campbell made an important discovery during this eclipse, that the corona of the sun is strongly polarized. This observation indicated the presence of material particles in the corona. Today we know that these particles are nothing but electrons, but the electron was not yet discovered in 1868. Later the French spectroscopist Jules Jansen observed the bright prominences in corona and found a way to observe them even outside the eclipses. Later the English Later Lockyer physicist carefully examined the spectrum of prominences and found a yellow line which he could not attribute to any known element. He invoked a new element to explain the presence of the yellow line and called it helium after ‘helios’ meaning the Sun in Greek. 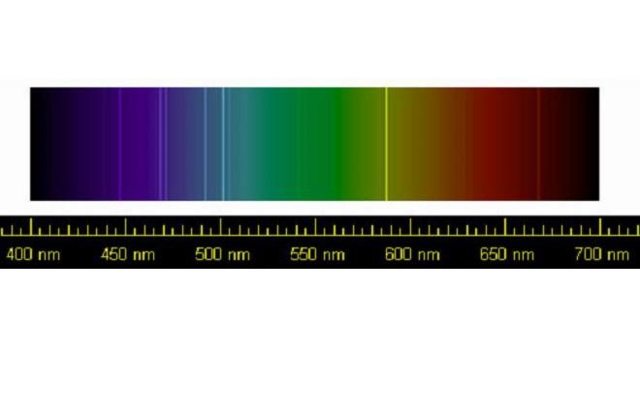 A spectrum of Helium element during Solar eclipse

General theory of Relativity: ‘Bending’ of starlight near the sun

One of the most famous series of experiments conducted during total eclipses was to test the predictions of the general theory of relativity formulated by Einstein.

According to the theory, the maximum deflection of the starlight near the sum would be 1.75 arc seconds. The deflection would decrease in inverse proportion to the angular distance of the star from the center ,of the Sun. The experiment would consist of photographing as many stars as possible in the vicinity of the Sun during totality followed by photographing the same field about six months later when the Sun is no longer in that part of the sky . Since the measurements of extremely small angles are involved, the measurements should be very accurate. Atmospheric aberrations, distortion of stellar bodies due to minute defects in the cameras would add further complications. This challenge was taken up by the young scientist Arthur Eddington. After measurements, Arthur found out the deflections ranging from 1.55 to 1.94 arc seconds with a mean error of 0.3 seconds. This essentially proved the General theory of relativity. That was a momentous occasion in the history of mankind. 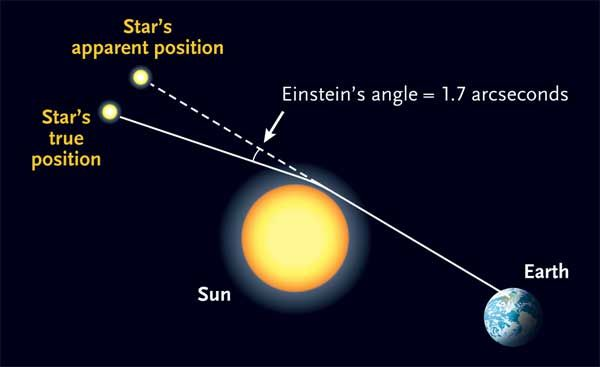 Total eclipses of the Sun will continue to occur with clock like regularity for at least another 600 million years providing the earthbound eclipse chasers with changing views of the beautiful corona, as the Sun goes through its activity cycles.

As each totality passes into history one is left recalling the immortal lines of John Keats in Endymion:

“Thing of beauty is a joy for ever: Its loveliness increases; it will never Pass into nothingness”. 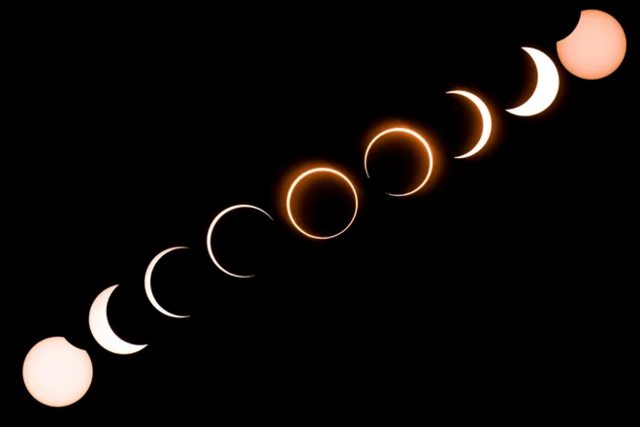