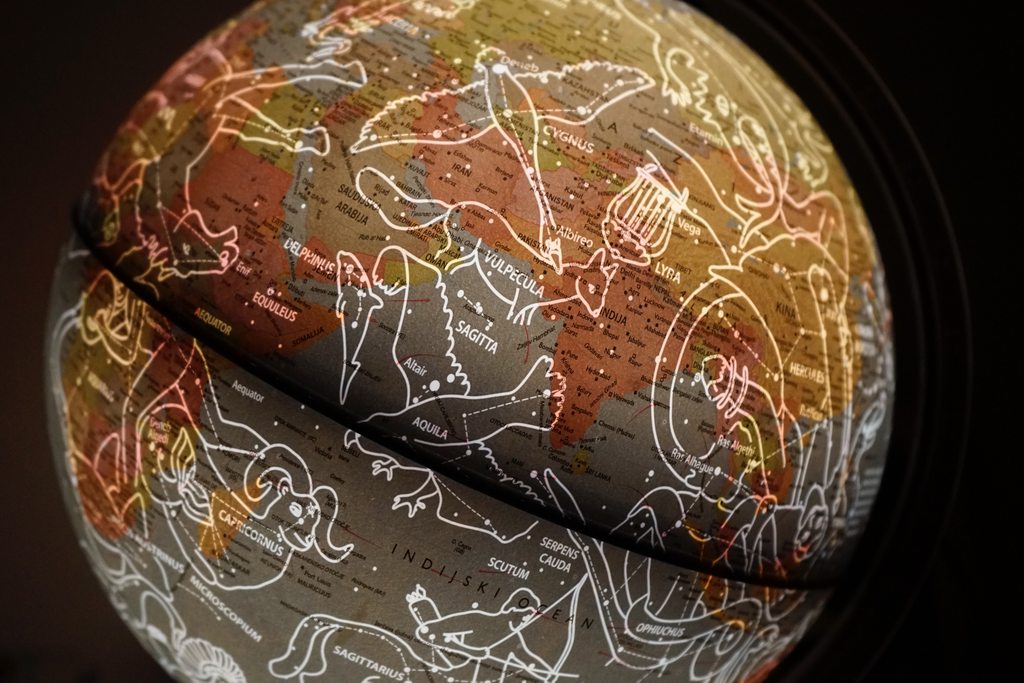 ←
PREVIOUS
Evolution Of The First Galaxies

The Mythology Of The Zodiac

All of us have heard of the zodiac signs; Taurus, Virgo, Leo, Aries, and many others besides. To understand the origin of these ‘sun’ signs, we first need to know what the ecliptic is. The ecliptic is a huge imaginary circle in the night sky, the path on which the sun travels over the course of a year. It is so-called because eclipses occur when the moon crosses this imaginary line. All the planets except Pluto, and the moon as well, move along the ecliptic.

The zodiac constellations are those constellations that the sun passes through over the course of one year. Contrary to popular belief, there are 13 zodiac constellations, but the ancient Babylonians, who started this system, had only 12 months in their calendar and omitted the 13th constellation, Ophiuchus. Each of the 13 constellations has a meaning to its name and is often involved in a fascinating mythical tale of gods, heroes and monsters. Without further ado, let us delve into this plethora of history and knowledge.

Phrixus and Helle were the Twin children of a Boeotian king. The children had a stepmother who hated them and consequently concocted a plan to have them sacrificed to the gods. Just as they were about to be killed, the gods had pity on the children and sent a magical flying ram with golden wool to save them. The ram took them to Colchis, but Helle fell off into the ocean, and that part of the Aegean sea is known as Hellespont, or the sea of Helle in her memory. After reaching Colchis, Phrixus sacrificed the ram to the gods and presented its fleece to the king of Colchis, and this was known as the Golden Fleece, with powerful healing properties which was the quest of Jason and the Argonauts. The ram was immortalized is the night skies by the gods in honor of his sacrifice, and that constellation is now known as Aries, the ram. 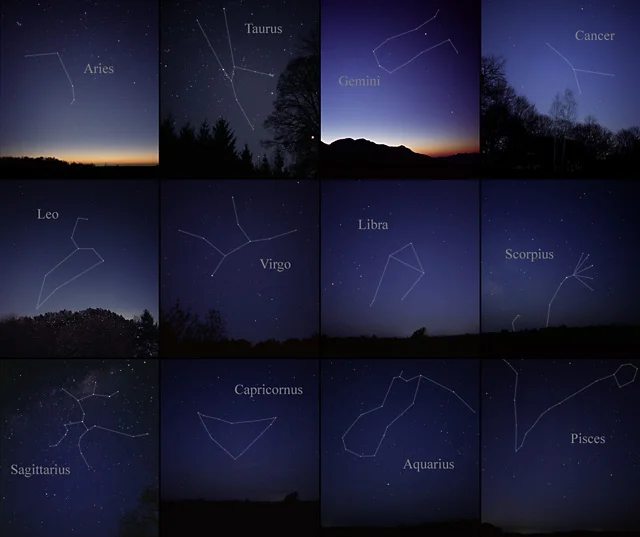 Zeus, the king of the gods, was never really a faithful husband. He was infatuated with many mortal women, notably beautiful princesses, but, being a married man, had to resort to disguises to seduce them. Zeus once fell in love with Europa, a beautiful princess who loved to play on the beach. He took the form of a beautiful albino bull and swam towards her, and Europa was quickly awed by its beauty. While caressing the horns of the disguised Zeus, he quickly swam out into the open ocean, and Europa had to hold on to his horns to stay afloat. Zeus took her to an island called Crete and seduced her there. One of their children, Minos, became the king of Crete and held bull games in honour of Zeus in the form of Taurus, the Bull.

Castor and Pollux were two twins born to Leda but born of different fathers. Castor’s father was the king of Sparta, while Pollux’s was Zeus. Thus, Pollux was immortal but Castor was not. These twins were the best of friends, sharing many adventures together, and shared a strong bond and a happy life, but it was not meant to be. Such is the curse of immortality that Pollux had to watch his beloved brother die. Distraught, he appealed to his father to bring Castor back, or he would have no will to go on living. Zeus decides to make them both immortal and we see them today as Gemini, the twins, a brotherhood like nothing else.

Heracles, the mighty Greek hero was the son of Zeus, a result of one of his extramarital affairs. Consequently, Hera, Zeus’ wife hated him, and to kill him, ordered him to perform 12 deadly tasks. One of these was to kill the mighty and fearsome hydra, a venomous, snake-like creature with many heads. To aid the hydra, Hera sent a crab to bite Heracles’ foot while he was fighting the hydra. Luckily, Heracles managed to focus and smash the crab’s shell with his foot. In recognition for its services, Cancer, the crab was made a constellation by Hera.

The Nemean lion was a fearsome, clever beast that preyed on humans. It had a hide that no mortal weapon could pierce, and a razor-sharp array of claws and teeth. It would kidnap the women from a village and lure the warriors to save the damsel in distress, and then ambush and eat them. The first task of Heracles was to kill this monster. Unable to penetrate its hide with his weapons, Heracles ultimately used his prodigious strength to suffocate the lion, and took its hide as a pelt to protect him from all weapons.

Virgo is the goddess of innocence and purity, Astraea. Legend has it that Zeus sent Pandora as a punishment to all mankind. Pandora, a naturally curious young girl, opened a box she was warned not to open, and hence released sickness, envy greed and all sorts of misery on humans. This box was later called Pandora’s box. As a result of these conditions, all the gods left the earth and went to heaven. Astraea, closest to the humans, was the last to leave, and to watch over all of humanity, she took the form of Virgo, the maiden.

Libra was actually part of the constellation of Scorpius and formed the claws of the scorpion. However, when Rome was founded, the moon was in the area of sky in which Libra presently is, and the Romans reformed it into the new constellation of Libra, the scales, representing justice, equality and balance, the principles on which Rome was built. In Greek mythology, they represent the scales of Astraea, who was also the goddess of justice, which fell nearby as she ascended to the skies.

The legend of Scorpio is related to Orion, the hunter’s constellation. According to legend, Orion was the greatest mortal hunter the world had ever seen, with skills second only to Artemis, goddess of the hunt. Boasting about the animals he had killed, his claims that he was the greatest hunter of all time reached godly ears. The gods were not at all pleased with his bragging, and sent a monster like no other for him to fight. They created Scorpio, the scorpion to kill Orion. In a bizarre godly twist of events, the hunter was now the hunted, as Orion had never seen scorpions before and did not know how to fight them. He died at the hands (or claws, rather) of Scorpio, and the scorpion has enjoyed a regal place in the night sky, a reward for teaching Orion that, no matter how good you are, there is always someone better.

Centaurs are beastial creatures, with the lower bodies of horses, but the head and torso of humans. They are inclined to be violent and riotous, but the Greeks held much more respect for them than others. The centaur Chiron is one of the most famous centaurs in Greek mythology: a learned and talented archer, musician, physician and healer, he also had at his disposal the gift of teaching. He had tutored in his lifetime many of the greatest Greek heroes, including Achilles, Jason and Hercules. He was, however, accidentally shot by Hercules with a poisonous arrow. Not being able to cure himself of the deadly poison, but not being able to die either (he was an immortal being), the gods had pity on his suffering and gave him peace among the stars as Sagittarius, the centaur.

Sea goats were, as the name suggests, animals with the head and body of goats but the lower body and tail of fish. They were, unlike normal goats, very smart and capable of speech, and had the farour of the gods. Pricus was the ancestor of all sea goats and was created by Chronos, the god of time. Pricus was created with the ability to reverse time. As time went by, Pricus realized that his offspring would lie for long hours on the beach, and eventually evolve to lose their hind legs and become normal, mindless land goats. Upset by seeing his children become dumb animals, Pricus reverses time to warn them of their impending doom, forbidding them to ever go near the shore. His children, however, ignore his warnings and continue to visit the shores. Again and again, Pricus would reverse time, and again they would head to shore. Pricus then realizes that he cannot change their destiny, and is immensely saddened by this. He begs Chronos to let him die, but Chronos instead turns him into a constellation high up in the sky, from where he can watch his successors on even the highest mountain tops.

Ganymede was the young prince of Troy and was one of the most handsome boys in all of Greece. One day, while roaming in the pasture, he was spotted by Zeus, who was smitten by the boy’s handsome looks. Wanting Ganymede all to himself, Zeus swooped down in the form of a giant eagle and carried the boy off to heaven, and made him his personal slave. All-day long, Ganymede would carry food and wine for Zeus. One day, the boy decided he had enough and poured all the wine and ambrosia onto the earth, and refused to stay the cupbearer of Zeus any longer. Since he had seen the heavens and the gods, the boy could no longer return to the earth but was seen forevermore in the skies, pouring the holy drink of the gods into the night skies.

During the Great War between the gods and the titans, monster Typhon ambushed the gods and threatened to destroy all of them. All the terrified gods transformed into small animals and darted away, except Aphrodite, the goddess of love, and her son Eros, because they had no animal forms. As they were cornered beside a river, two fish agreed to help Aphrodite and Eros escape into the river, as Typhon was a monster of fire and couldn’t enter water. To prevent them from getting lost, the two fish tied their tails together and safely carried the two gods to safety. In recognition of their invaluable help, the constellation of Pisces was made in their honour.

The mythology of these constellations, although very fanciful and hardly true, always fascinate me. These stories turn random patterns of unrelated stars in the sky into living, moving characters in a nail-biting story, taking us into the past when chimeras and gorgons roamed the land, and brave, mighty heroes went on conquests to rid the Earth of such hideous creatures. It has led me to read about all the other myths and legends associated with the other constellations, and I hope that all of you will also enjoy the myths and stories as much as I did.